Explaining what we see outside the courthouse 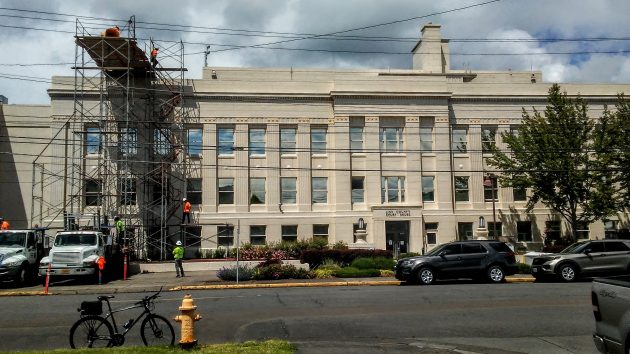 Workers put up scaffolding on the south side of the Linn County Courthouse on Thursday.

Why are they putting up all that scaffolding at the Linn County Courthouse this week? To gain access to the roof so the roof can be replaced, that’s why.

This is the main part of the courthouse that was completed in 1939, where the roof was last replaced in the early 1990s. The west wing, added in 1969, got a new roof a few years ago.

The job will be done by McDonald & Wetle, a Portland company, which won the contract through competitive bidding with a low bid of about $347,000.

Russ Williams, head of general services for the county, says the company has four weeks to complete the job, but the scheduling is dependent on the weather.

The courthouse is a handsome building and has lasted more than 80 years. Glad to see the county is working to make sure it can serve its purpose for many decades to come. (hh)


6 responses to “Explaining what we see outside the courthouse”