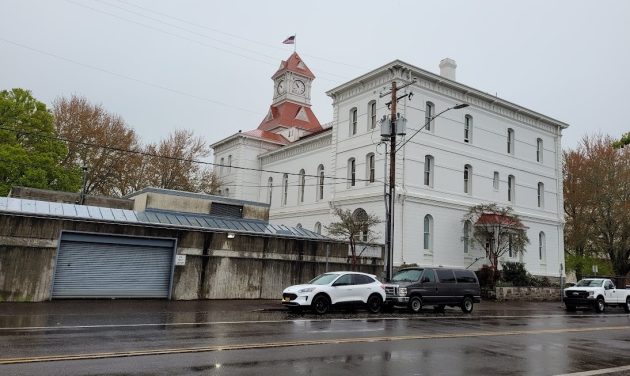 The Benton County Courthouse as seen from the back on a rainy day last April. The low structure on the left is the county jail.

Seven years after their last attempt to win voter approval for a new jail, Benton County officials are assembling a more ambitious and much more expensive expansion project for which property taxpayers eventually will get the bill — if it is carried out.

The last jail bond proposal, for $25 million, was defeated in November 2015. Three years later, in 2018, the county commissioners, their successors and consultants started assembling the details of a new plan and preparing the public to accept it when the time comes to vote for the money.

The time to vote is supposed to come in May 2023, when the commissioners hope voters will appove a bond issue of up to $100 million. The final amount to be requested has not been decided.

The bond money would pay for construction of a new jail and sheriff’s office, surrounded by plenty of parking, on about 29 acres of farmland in Corvallis, near Hewlett-Packard off Highway 20. Officials have offered the owners about $5.5 million for the land and told them it will be taken by eminent domain if the offer is refused.

Along with the jail and sheriff’s office, the county plans to build a new courthouse on the site, with an estimated cost of up to $50 million, but this will not be part of the bond proposal. Instead the county plans to use state grant money for half the cost and somehow borrow the rest.

As for the historic courthouse in downtown Corvallis, it’s to be put to other uses. Details are to be developed later, presumably along with remodeling and other costs.

This week, the county commissioners voted to locate the district attorney’s office in the new courthouse at an estimated cost of $8 million. The county has not been clear on whether that cost is part of or in addition to the estimate of $50 million for the courthouse.

The county calls this grand development the “Community Safety and Justice Campus.” The purpose of this “campus” is to “develop an efficient, effective and equitable justice system in Benton County,” in the words of Nancy Wyse, chair of the county board.

Taxpayers may wonder whether the Benton County justice system isn’t already efficient and fair despite its limitations, such as only 40 beds in the jail and not enough office space for the DA.

Voters may ask that question again next spring before they’ll agree to approve a big bond issue that will show up on their property tax bills for years to come. (hh)