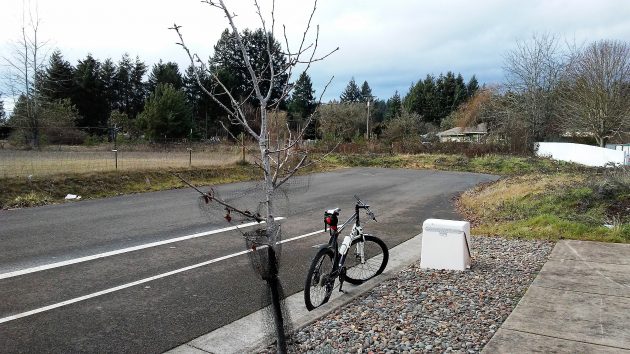 The west end of Hickory Street, where the Albany leg of the Albany-Corvallis Bikeway is supposed to take off, roughly in the direction you are looking.

In September 2014 the Albany City Council said it would help pay for the Albany leg of the proposed Albany-Corvallis Bikeway. Now the council is being asked to authorize a formal agreement with Benton County to that effect.

The Albany leg would run for little more than a mile from the west end of Hickory Street in North Albany to where Scenic Drive ends on Highway 20, the Albany-Corvallis Highway. From Hickory, the path would cross vacant land, turn right at Walker Lane, then left and follow the Portland & Western track, until crossing the track just past Rainwater Lane, and follow West Thornton Lake Road to Scenic Drive.

Construction of this leg is proposed in 2018 as part of ODOT’s Statewide Transportation Improvement Plan. The state plan lists the $2.7 million project as extending for 1.72 miles from Spring Hill Road to Scenic. But from Spring Hill along Hickory to the point where Hickory ends, the route already exists in the form of painted bike lanes.

The Albany council’s agenda for Wednesday (Jan. 25) includes action on an agreement with Benton County, the lead agency in the long-planned bikeway project, on sharing expenses for the project. ODOT would pay more than $2 million. Albany would contribute $304,500 from its systems development fund for transportation, and Benton County would pay the rest, including $202,522 for property acquisition.

Benton County is still trying to determine whether to even build the rest of the bikeway, and if so where it should go. Presumably, though, if the Albany segment is built as planned, the much longer Benton leg would have to start (or end) at Scenic and Highway 20.

On a map included with the council’s agenda, the Albany leg seems to run across a number of private properties along the south side of the P&W track. I’m trying to learn whether the owners have been apprised of this. When the answer comes in, I’ll pass it along. (See below.)

As usual, the council meets at 7:15 p.m. Wednesday at City Hall. If you’re interested — and why would you read this far if you’re not? — you can watch on Comcast Channel 23 or cityofalbany.net. (hh)

I heard from Ron Irish, the transportation specialist at City Hall. He says ODOT is responsible for acquiring the remaining rights of way or easements needed from eight or nine property owners along the eastern one-third of the path. Rights of way or easements are in hand for the western two-thirds of the alignment. Where the path crosses the PNWR track, it goes under an existing trestle. (hh)

♦  A note about terminology. Local officials call this project the “Corvallis-Albany Path.” Since it parallels the Albany-Corvallis Highway, that would be a more proper sequence of towns in the name. And as for “path” or even “multi-use path” as it’s sometimes described, it would be unusual for pedestrians to hike 10 miles between these cities. The main use would be by people on bikes. So a bikeway it is.)