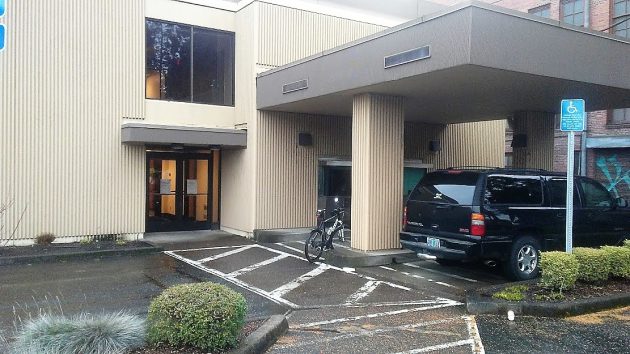 How about a charging station here, at the drive-up of the city-owned former Wells Fargo branch downtown?

Should the Central Albany Revitalization Area provide charging stations for electric cars downtown? The CARA advisory board will get a chance to talk about that idea when it meets on Wednesday afternoon.

One of the likely issues, besides the cost and whether this is a proper project for the urban renewal district, is where one or more charging stations could be installed. Each one presumably would take away a regular parking space.

Riding around on the bike the other day, I thought that maybe the drive-through at the former Wells Fargo branch at First and Broadalbin would be a possible spot. CARA recently bought the vacant branch for $1.5 million, hoping to turn it into a draw for downtown.

A staff memo to the CARA board — “Electric Vehicle Charging Stations in CARA” — raises the topic. It’s included with the board agenda for the meeting scheduled at 5:15 p.m. Feb. 20 in the council chamber at City Hall. (They’ll also get an update on the Wells Fargo site.)

The memo notes that electric cars are becoming more common. It suggests that having charging stations would be helpful in the downtown area “re-establishing itself as a hub for vibrant life, work and play.”

The cost of providing charging stations, including infrastructure, equipment and installation, runs up to about $12,000 per port, according to the memo.

The website ChargeHub shows seven working public charging stations in Albany. One, a fast-charging Level 3 device, is said to be at Fred Meyer. The other six, all of them Level 2, are at Linn-Benton Community College. (Two others are south of town, at a Chevron station on Highway 34 at I-5.)

The 2001 urban renewal plan that launched CARA did not mention “electric vehicle supply equipment,” or EVSE for short, among its 52 planned projects and activities. But unless I’m mistaken, they didn’t have electric cars. (hh)

Prompted by one of the comments below, I looked and yes, you can charge electric cars at the Albany Walmart. In fact, there are four charging stations there.