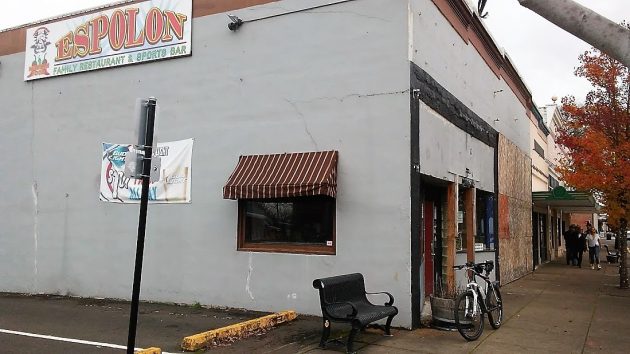 This building on First Avenue in downtown Albany has been closed since part of its façade collapsed during attempted repairs more than a year ago. But now the owner has submitted repair plans for the city’s review.

Before the shutdown, the building at 129 First Ave. W. housed a restaurant and bar called “Espolon,” which is Spanish for spur, especially the spurs on the back of a rooster’s legs. A banner advertising tacos for one dollar each still hangs on the outside western wall.

The owner is Gary C. Nieland, of Las Vegas. He submitted plans to rebuild the storefront and modify the window on the west side, and because the building is considered historic, the application will undergo historic review.

The Albany Community Development Department asked the applicant for clarifications on a couple of points, and when that’s done the plans likely will go to the city’s Landmarks Advisory Commission for a hearing in January.

Albany considers the structure historic. According to county tax records, it was built in 1920. Apparently there had been a lot of deterioration, because when repairs were attempted to get rid of dry rot, part of the front wall collapsed. The city issued a stop-work order on Sept. 22, 2016. The front was boarded up and braced, and that’s where things have stood since.

I was reminded of the Espolon collapse — and checked for this follow-up — after the roof collapsed earlier this month and forced the evacuation of another downtown building, at Second Avenue and Ferry Street. There, owner Matt Bennett said, plans for repairs were being made. (hh)