There are lots of ways to observe the first day of summer, I guess. But I figure one of the best is to make use of the county roads in Oregon’s mid-valley for a leisurely ride on my bike. So that’s what I did on Monday morning.

I circled through the countryside south of Albany and then made my usual loop through the town itself, following my riverfront beat. Conditions were ideal: Temperature around 70, a slight breeze from the southwest, and hardly any traffic. I guess everybody else had to be at work and didn’t have the luxury of aimlessly cycling through the countryside.

If you’d like to do something similar this summer and are wondering where to go, there is a handy map you can get at various tourist centers and, I believe, city and county parks and recreation departments. Produced by Albany and Linn County and published in 2012, the Albany Pedestrian and Bicycle Map shows suitable bike routes along city streets in Albany, Lebanon and Sweet Home, but it also shows every available road from as far north as Independence and the outskirts of Salem to as far south as Harrisburg, Junction City and Eugene. More important, it grades each segment of road on factors important to cyclists, such as the width of shoulders, traffic volume, and hills.

County roads with very little traffic are shown in green. Those are the ones where, in my opinion, the riding is best, especially when the wind is at your back. (hh) 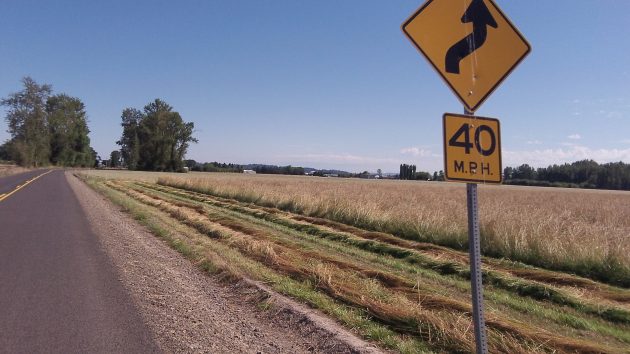