Enjoy the AC while you still can 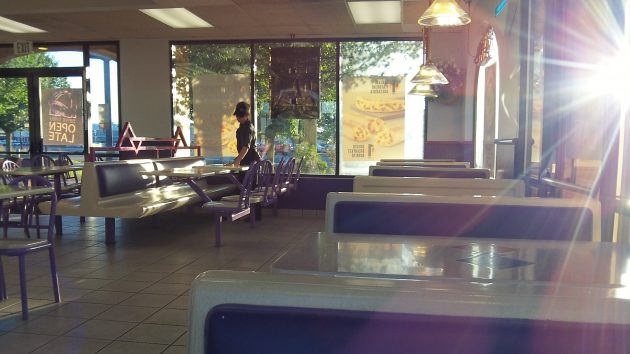 The sun’s rays get in, but the heat stays outside at this Taco Bell..

After a bike ride when the temperature is in the 90s, I am grateful for any oasis that is crisp, clean and above all cool. So about an hour before sunset on Thursday, I landed at Taco Bell on Southwest Pacific. The crowd was gone. Except for a staff member wiping tables, I had the cool air in the seating area all to myself. And I was thinking about how great an invention refrigerated air conditioning is.

Air conditioning depends, of course, on electricity. And especially during a heat wave, it’s good to remember where our electricity comes from. So take a look at this graph from the Bonneville Power Administration: 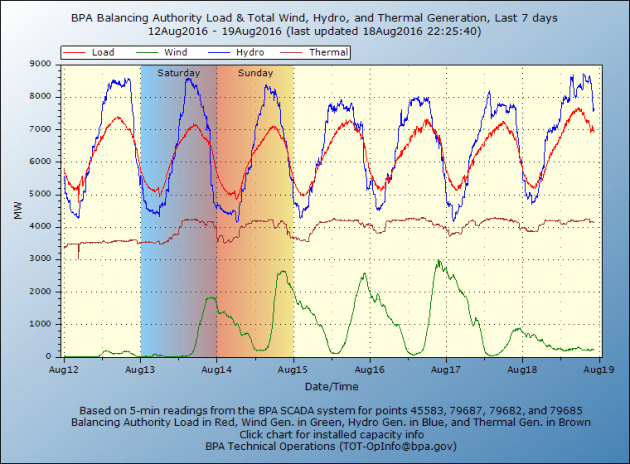 The graph explains itself. Last Friday and Saturday, when it was hot in Oregon, hydro and thermal power sources, including coal, were going like gangbusters and keeping the juice flowing around the BPA system. What about wind? What wind, you might ask. The wind died those days, and the various windmill farms did nothing to help.

Thursday was another hot day, with air conditioners humming away not just at my friendly Taco Bell but everywhere else. And again, hardly any contribution from wind. If it weren’t for the hydro dams and the thermal plants feeding the Northwest, we’d probably be having brownouts and suffering in the heat.

The problem is that without thermal generation, which means coal, gas or nuclear, our energy picture would be bleak indeed. That’s because on days when the weather makes electricity even more necessary than usual, it’s common for the winds to die down.

Our policy makers in Oregon and D.C. don’t care about that. They are forcing utilities to shut down coal generating plants. In some cases they are pushing for the removal of hydro dams, like those on the Klamath River in Oregon and California. (Take a look at your power bill: You are already paying for the eventual removal of those four dams, JC Boyle, Copco 1 and 2, and Iron Gate.)

Unless this policy is reversed with the election of different leaders at the state and federal levels — and there’s no sign of that — there will come a time when during heat waves or other times of heavy electricity demand, air conditioning will not be an option. And during the winter neither will electric heat.

So after a hot day’s ride I’m going to enjoy an occasional meal in the crisp coolness of Taco Bell, or some other place like it, while I still can. (hh)


18 responses to “Enjoy the AC while you still can”