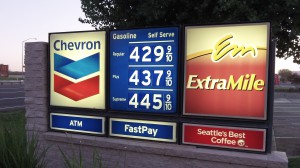 While Oregonians cope with high fuel and heat bills this winter, Democrats in the legislature are working to make sure prices stay high and rise even more. They are working on legislation to cause consumers to pay more for gasoline and diesel, and for electricity too. You’d think voters would put a stop to that, but so far they have not.
On Feb. 12, the Senate Environment and Natural Resources Committee will hear SB 1570. The measure was introduced by Sen. Lee Beyer, D-Springfield, whose district reaches into Linn County up to the southern outskirts of Lebanon. The bill would continue Oregon’s low-carbon fuel program, which was ordered by the 2009 legislature but never carried out  because it was too complicated and potentially costly.

The 2009 bill included a provision that repeals its most harmful sections at the end of 2015. Beyer’s bill would repeal that sunset clause, leaving the requirements in effect.

The original law directed the Environmental Quality Commission to make rules to reduce the carbon content or “intensity” of motor fuels 10 percent by 2020. The rules are supposed to consider the entire life cycle of motor fuel from beginning to end, as well as land use, presumably to cut back on driving. The DEQ has tried to write the regulations but gave up. Further, the Ninth Circuit Court of Appeals ruled last October that only California is allowed to set its own standards for motor fuel under the Clean Air Act.

As for electricity, the Oregon House is considering a bill likely to result in higher rates. HB 4126 cleared the House Energy and Environment Committee on Thursday just ahead of the big western Oregon snowstorm. The bill would allow consumer-owned utilities to bypass the state’s renewable energy standard so that a cooperative in Umatilla could meet the needs of big server farms being established there. You’d think that what is good for Umatilla would be good for everyone. But no, this is a special deal.

The bill is intended to thwart  attempts by the Umatilla cooperative to launch an initiative to allow hydropower to be counted as renewable. (Counting it would make the renewable mandate moot. Hydro is the most renewable energy source we have, but the law says it does not count.)

The Oregonian reports that the big utilities, PGE and Pacific Power, have agreed to a compromise on the bill continuing the renewable mandate. This would allow them to make special deals with industrial users to sell them so-called “green power.” Since Pacific’s green power costs more than generic power, it’s hard to see how any industry would accept such an offer.

But in any case, if the bill passes, the renewable mandate stays in effect. It says that by 2025, utilities must get 25 percent of their power from renewable sources. Renewables such as wind and solar require more investment, and more investment means higher rates that utilities are allowed to charge.

The best thing would be for the renewable mandate to be repealed. This would allow all utilities to develop the least costly means of generating electricity. That won’t happen as long as the people now in charge in Salem remain in charge. Democrats like to complain of income inequality. With energy policies like these on fuel and electricity, they are making the lives of poor people worse. (hh)


One response to “Energy mandates: You pay more”