Encounter with geese, sort of

Am I frightening these geese or what?

Here I was riding my bike outside Jacksonville in southern Oregon on Sunday when I spotted a gaggle of Canada geese in a meadow by the side of the road. I stopped to take a closer look, but as I did, the birds — all of them — waddled away from me.

Unlike the ducks in some of our parks, which sometimes gather around passersby in hopes of a handout, these geese were of a more wary sort. Smart, too. I had nothing to offer them. All I wanted was a look at them. But they were not interested in being looked at. (My impression of them was confirmed when I looked them up in a bird book later. “Intelligent and naturally wary,” it said.)

I assumed they were on their way some place and were just stopping here for a rest. I wished them a nice flight. (hh) 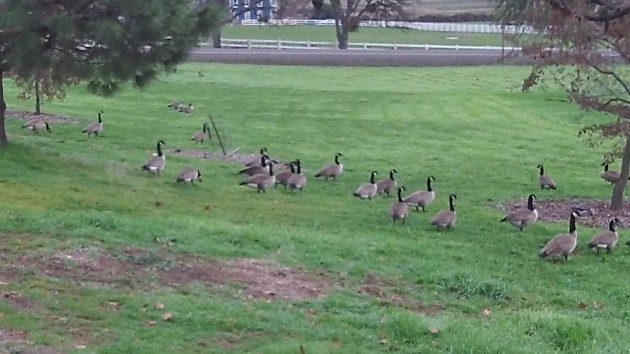 
One response to “Encounter with geese, sort of”