Written May 5th, 2021 by Hasso Hering
Comments: no responses. 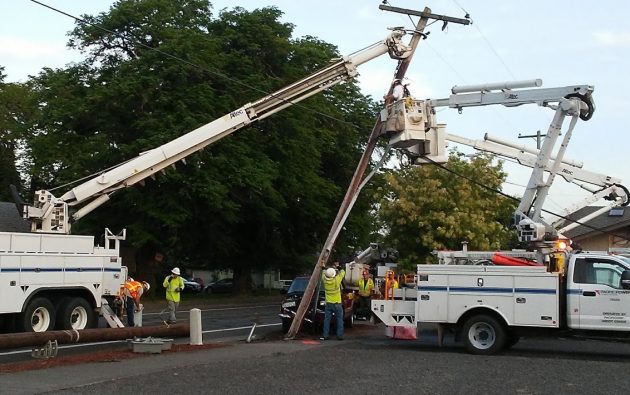 Not all my bike rides in Albany are completely uneventful. On Wednesday night, for example, I watched for a few minutes as Pacific Power dealt with the aftermath of a car crash on Southwest Elm Street near 10th.

A small pickup had slammed into a power pole, evidently shearing it off at the base. The power company crew was taking it down and replacing it with a new one.

I wasn’t there when it happened. From an Albany police officer I heard that the driver said he had fallen asleep.

Pacific Power’s outage map said that because of the emergency repair, 12 customers were temporarily without power starting at 7:37 p.m., 16 minutes before the photo above was taken.

The driver, I was told, did not need to be taken to the hospital.

Why the “again” in the headline? See the entry on this site just before this one. (hh)