Electoral College: Long may it last 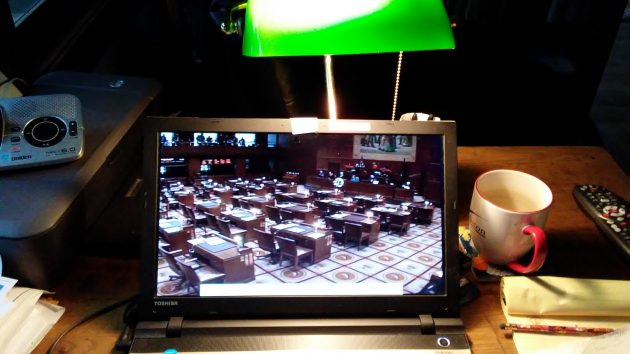 The legislature’s video setup enabled people like me to watch the Salem ceremony in the Senate chamber from afar.

As a fan of the Electoral College, I watched Oregon’s part of the proceedings Monday on the legislative website. The ceremony has no speaking parts for any of our seven electors, but one chose to pipe up anyway, demonstrating his apparent disdain for what the Constitution provides.

As scheduled and expected, the seven cast their votes for Hillary Clinton, who won the general election in Oregon with 48 percent of the vote over Donald Trump with 38 percent. Other candidates split the remaining 14 percent of the more than 2 million votes cast.

Whatever his views of the nationwide outcome or the process of the Electoral College, Albany elector Sam Sappington, representing the 5th congressional district, did not feel it necessary or useful to share them at the ceremony. His fellow elector Frank Dixon of Portland, chairman of the Oregon Democratic Party, however, spoke up.

Dixon felt it necessary to express the electors’ objection that the Russians had interfered with the election. This has become a refrain among people upset with the outcome. But there’s no evidence that anyone “interfered” with the election. All we know is that according to media reports, Russian hackers gained access to private emails among top Democrats and contrived to make them public.

If making public the confidential email traffic among politicians is “interference,” we should have more of it. Voters should know what politicians say in private, not just what they feed a gullible public. Also, those email releases would have been ignored if the American media had not feasted on them like sharks on a herd of wounded seals. So if there was interference, the networks and major papers made sure it took place.

More significantly, the chairman of Oregon Democrats complained that the constitutional process of the Electoral College did not honor the principle of one person, one vote. That’s true, but it’s the way the authors of the Constitution designed the system. The framers were aware of the principle, as their writings make plain, but they intentionally settled on another way of choosing presidents.

They devised a system that preserved the voice of smaller states in the presidential election. It also represented a compromise between states that allowed slavery and those that didn’t. The system reflects that ours is a country woven together of separate states. The choosing of a president is done state by state, not as one giant nation. This federal arrangement is in danger if being obliterated, but the Electoral College, firmly anchored in the Constitution, keeps it alive.

Among citizens of all political persuasions, this ingenious system should be admired, not be the subject of objections and complaints. (hh)


39 responses to “Electoral College: Long may it last”