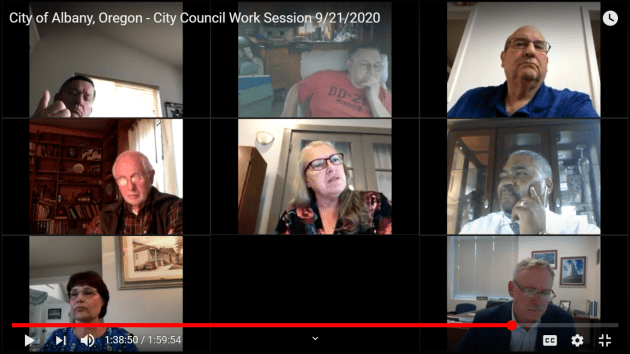 During its virtual session Monday, the council listens to Manager Peter Troedsson, bottom right, talk about plans to develop a monthly fee to augment city revenues.

Albany officials have the green light to prepare a city utility fee to help support the parks, libraries and police and fire departments. But whether or when the new fee starts depends on decisions yet to be made, either by the voters or by the council alone.

City Manager Peter Troedsson Monday got the council’s OK to start the development of a monthly fee to help close the growing gap between city expenses and income. “This preparation work is required before council considers implementing a utility but does not obligate the council to do so,” he wrote in a memo, “and it does not impact whether council implements the utility on its own authority or refers it to the voters.”

The fee would be added to the monthly billings for water, sewer and storm water disposal. Once a fee package is worked out, whether to impose it or refer it to voters will be up to the council in office from 2021 on.

Based on answers to questions I posed them, candidates running for mayor and council in the Nov. 3 election are divided on the issue.

In Ward 1, Keith Kolkow thinks “voters should have a say” on the utility fee, and Matilda Novak wants to “let the public decide.” But Sean Knowles says that if a utility fee proves necessary, it “should be decided by the council.”

In Ward 2, Ray Kopczynski says he definitely supports the council imposing a utility fee, while Amanda Dant provided an 11-line reply that doesn’t say which way she’s leaning. “I think the council and community will need to work together to find new ways to bring funds into the city and consider imposing new/raised fees,” she wrote.

In Ward 3, there’s a clear division on that question. “Councilors are elected to make such decisions,” wrote Marilyn Smith. But Jessi Brenneman said, “I do believe the utility ‘fee’ should go to the voters.”

Mayor Sharon Konopa, running for re-election, has often said she wants the council to enact a utility fee. And Councilman Alex Johnson II, running against her, has maintained the decision should go to the voters. Both more or less reiterated those positions in their replies. (See the mayor’s comment below.)

If Johnson becomes mayor, someone new will be appointed to the council.

So, while a utility fee is almost certain to be proposed in 2021, the outcome on Nov. 3, 2020, will likely determine if the council or the voters decide whether it becomes law. (hh)

And by the way: “Utility fee” is a truly misleading term, but it’s in common use. In no way is paying for parks or the police anything like paying a utility bill, and the “fee” is really a tax. But Oregon courts have found that constitutional limits on property taxes don’t apply to these fees.

15 responses to “Election may affect Albany ‘fee’ next year”