Eighteen years (or so) of tagging… – Hasso Hering

Eighteen years (or so) of tagging… 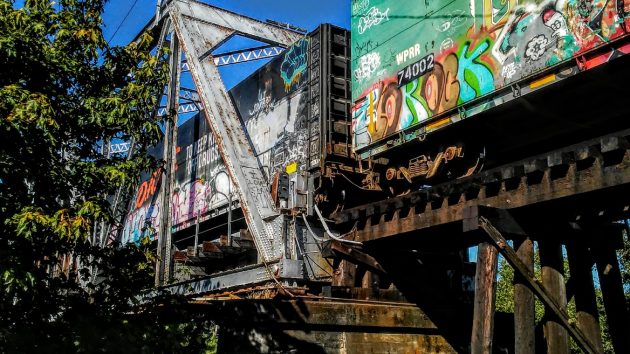 If memory serves, these woodchip hopper rail cars got their new paint schemes — honoring the Oregon Ducks and the anti-drug DARE program — in about 2000 or before. And look at the colorful messes created by taggers in all the years since.

The cars bear the markings, if you can see them, of the Willamette & Pacific Railroad, which was merged into its sister company, the Portland and Western (PNWR), in late 2000. The railroad gave three cars a special paint treatment. The third  (last seen on hh-today this past July 14) honored the Oregon State Beavers and like the other two has been thoroughly defaced.

I was on the riverside Dave Clark Path last week when an eight-car train of the PNWR stopped above me after crossing the Willamette River on the 1921 Albany rail bridge. The UofO and DARE hoppers were in the middle. These cars are a familiar sight all over the railroad’s Oregon system, and they’ve been photographed many times.

If you want to see how they looked the day they were repainted, you have to go online and hunt for ads for model train cars. Search for train cars 74002 (Ducks) and 74001 (Beavers). Here’s an example of one:

The real-world rolling stock probably didn’t look like that for more than a week or two. As a tagging target, the temptation it offered was just too great. (hh) 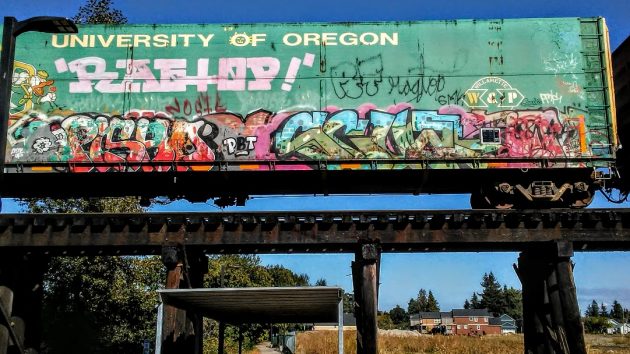 10 responses to “Eighteen years (or so) of tagging…”