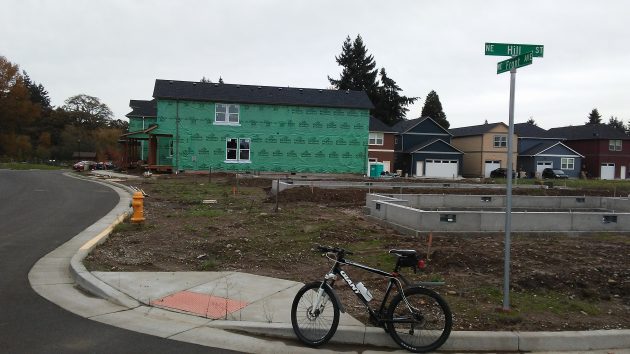 Three new foundations testify to the pace of construction at Edgewater Village.

Because it’s on my riverfront bike route, progress at Edgewater Village catches my eye. Now it appears the developers are ahead of the pace required under their latest contract revision with the Central Albany Revitalization Area.

In May, CARA granted developers George and Paula Diamond more time to meet the various stages of completion of their planned 60-unit development between Water Avenue and the riverfront Dave Clark Path. At the time, five houses were finished, and four more were to be completed by the end of 2016 for a total of nine.

On Sunday, it was obvious that seven houses had people living in them. Three more looked close to having their exterior finished, meaning that 10 likely will be occupied or ready for occupancy by the end of the year. And foundations had been poured for three more houses of the same narrow, two-story style as the others.

In May, though, CARA also said that by the end of 2017, at least one of the lots backing up to the Clark Path and the river should have a house on it. So far, there’s no sign of building on that side of the new section of Front Avenue, but there’s plenty of time. All 60 units are to be built by the end of 2020, two years later than under a previous agreement.

CARA advanced $2.4 million toward the project, and the developers are being forgiven $40,000 for every house they complete. The 6-acre site was an empty and weedy stretch of land where a former packing plant burned down in 2006 and then was demolished. The blighted state of the property caused CARA to look for a developer, and the initial plans have gone through several changes in the years since. (hh)


3 responses to “Edgwater: Ahead of requirements”