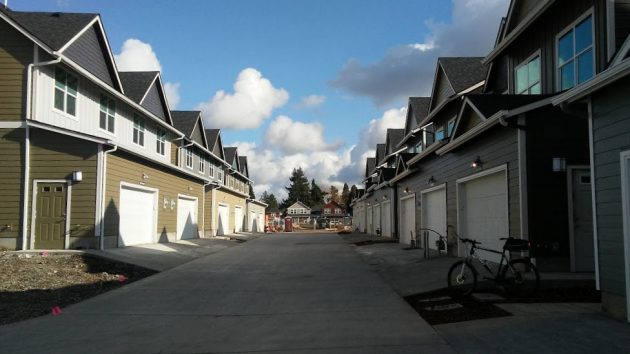 Edgewater Village townhouses with addresses on Front Avenue, left, and Water Avenue on the right.

The biggest residential development on Albany’s Willamette riverfront is rapidly nearing completion. I see the progress at Edgewater Village every time I ride past on the Dave Clark Path, which happens several times a week.

Painters have been working on two rows of completed townhouses between the Water Avenue railroad track and an extension of Front Avenue, while roofers and others finish the row of townhouses and detached homes overlooking the path and the riverbank.

As fast as they’ve been making headway, I’d bet the whole place will be finished and landscaped and ready for residents no later than spring.

I’ve been following this project for years. It was in June 2007 that CARA, the downtown urban renewal program, approved $2.4 million in financial aid toward what started out as plans for 146 dwelling units on the site of a long-closed former packing plant that burned in 2006.

The Great Recession and many other complications delayed action for a long time. The plans were revised several times and then reduced in scale until the city planning commission in 2013 approved a subdivision of 58 homes. Streets and utilities were built in 2014, and the first houses were started the year after that.

By now, 30 houses are complete, to be followed in short order by the 28 that remain. (If you have an interest in living there or want to contact the developers to learn more, their website has their contact information.)

Right in the middle of the roughly 6-acre site, there’s nearly one acre owned by the city, obtained from the BNSF Railroad as part of a franchise deal some years ago. Soon it won’t be needed as a construction yard, so maybe now would be the right time for the city council to consider what to do with that land. (hh) 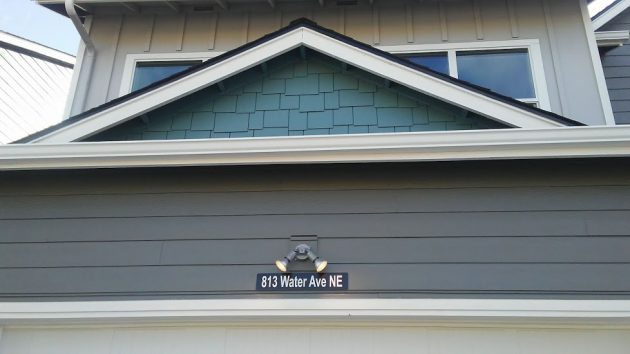 Each of the townhouses has a neat little number sign. 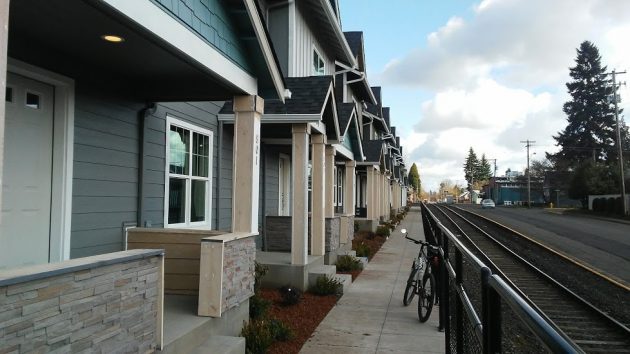 This is the south row of townhouses, facing Water Avenue.