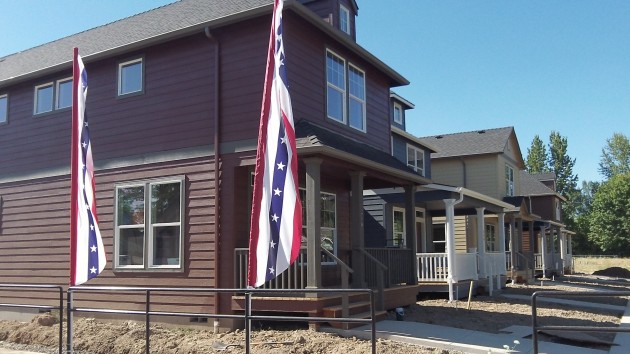 Getting ready for Saturday, the first dwellings at Edgewater Village.

For someone who has been following the long history of this Albany site on the Willamette River, as I have, this weekend marks another milestone. The first five houses of Edgewater Village are finished, beating a deadline, and the public gets a look at them Saturday.

The story started in 2006, when an old packing plant on the property burned to the ground. Because nobody else did, the city had to clean up the ruins. The Central Albany Revitalization Area solicited private developers, and after years of changing plans and other complications, the current plans for the 60-lot Edgewater Village subdivision were approved.

The first five dwellings had to be completed by the end of this month under revised deadlines set by CARA, which invested a total of $2.4 million in the development, starting with the initial cleanup of the site.

Now, it’s time for a grand opening, scheduled from 9 to 5 Saturday. The address is 206 Main St. N.E., though presumably each of the five houses has a different number.

A press release from the city quoted George N. Diamond, owner of Edgewater Village LLC: “I believe this positive change will be a turning point for the Hackleman’s Addition neighborhood and I expect the area to become ‘the place to be’ in the future for professionals, families and empty-nesters who enjoy urban living.”

The entire site measures between 5 and 6 acres and is bounded by Main Street, the Portland & Western tracks along Water Avenue, the Lafayette Street trestle and the Dave Clark riverside path along the Willamette. Like any subdivision at the start of development, the site still looks pretty raw. The buyers of the first houses will have to hope that the rest of the acreage gets developed soon.

One item yet to be resolved: The fate of a parcel in the center of the property. The city pressured the BNSF railroad to hand over the property as part of franchise negotiations, and now the land is just sitting there. The city should feel obliged to put the parcel back in private ownership and on the tax rolls as quickly as it can. (hh) 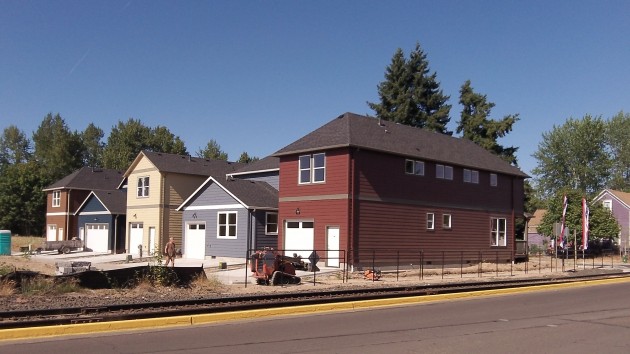 The view across Water Avenue and the Portland & Western track.