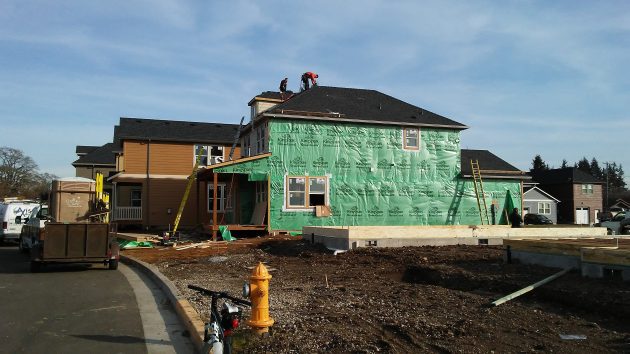 On Jan. 16, construction work continues on house No. 11 in Edgewater Village.

George Diamond, the developer of Edgewater Village on the Albany riverfront, would like to step up the pace of construction, but on Wednesday the downtown urban renewal board (CARA) had a lot of questions, qualms and quibbles and seemed reluctant to approve a financing change that he needs to get going.

The Diamonds, George and his wife Paula, have personally guaranteed a $2.4 million forgivable loan from CARA that, years ago, helped launch what the city envisioned as a way to revive what had been a dead zone of trash, weeds and rubble east of the Lafayette Street trestle, between Water Avenue and the riverfront Dave Clark Path.

The development plan was delayed and changed several times as a result of the great recession and other factors, including the wishes of CARA officials.  In one of the latest iterations, there were to be 60 homes including 28 townhouses, with $40,000 of the loan to be forgiven for each completed unit. So far, $360,000 has been forgiven and another $80,000 is pending.

Of the 10 houses completed (the 11th is being finished now), none has been sold, but several have been rented. Diamond said he’s content to rent them to good tenants, as he has done, and wait until the market improves to sell them at a price that won’t have him losing money on each sale.

The Diamonds now want to be able to borrow enough money from a bank to complete all the remaining street and utility improvements for the development and also build, all at once rather than piecemeal, the 28 townhouses on the west side of the tract, closest to the railroad trestle. To do that, they need the Albany development agency to raise its $1 million loan subordination limit to $6 million. (If you want to know exactly what that means, ask a bank or real estate loan expert.) They would also like the city to participate in the cost of building streets on two sides of a city-owned parcel in the middle of the development.

CARA board members talked about this for more than an hour Wednesday. At one point Diamond said that if the city would release him from its contract, he would gladly walk away and let somebody else deal with this project. In the end, the board rejected a motion on the loan subordination but then, as far as I could understand all the mumblings, the board’s 14 members seemed to agree to have the city staff write up an agreement with Diamond that would then be put to a vote at a subsequent meeting.

This issue has been pending since last October. The CARA board, in no great hurry to complete the urban renewal mission set in 2001, meets only once a month, and it skipped December. Now it’s going to take at least another month before the immediate future of Edgewater Village is resolved. (hh)