Edgewater Village: A push to finish 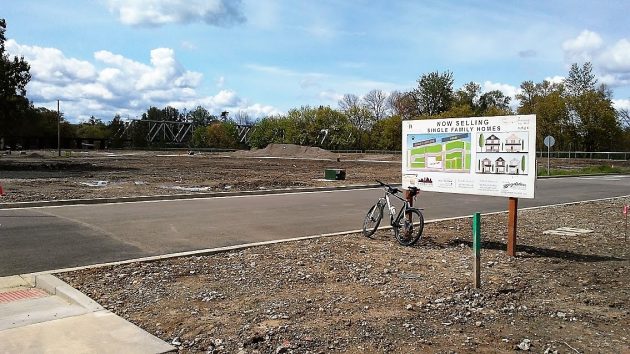 Looking toward the west side of Edgewater Village, where 28 townhouses are to be built.

Edgewater Village, the subdivision on Albany’s formerly industrial riverfront, is making arrangements to step up the pace of home construction after the Albany urban renewal board approved a change in its loan agreement with the developers.

The developers, George and Paula Diamond, have hired the Baldwin construction company to build 28 atttached townhomes and four detached houses in the project. Construction may start in June, and for the sake of efficiency the plan is to build all 32 units in groups of several at a time.

The Diamonds have commitments for a $6 million construction loan from Washington Federal for the 28 townhouses and a second loan of $1 million-plus, from First Republic Bank, for the four remaining detached houses along the riverfront Dave Clark Path. (Two houses along the path have been completed and have families living in them, as have 13 other houses.) Another loan from First Republic, for about $2.6 million, would finance an additional 11 single-family houses called for in the Edgewater plan.

To make way for the additional bank loans to the Diamonds, the advisory board of the Central Albany Revitalization Area on Wednesday agreed to subordinate CARA’s earlier loan to the development. If the project goes bust, the banks will have the right to collect from the Diamonds before the city can try the same.

In their memo on all this to the CARA board, the Diamonds pointed out that the already completed 15 homes in Edgewater pay a total of more than $60,000 in property taxes. A check of county tax records shows the properties each have annual tax bills of about $4,000 or above.

“We are planning to build all 28 attached homes and the remaining 15 single-family homes and one duplex in multiple groups as soon as loans are closed, insurance  and plans are finalized, and subs are confirmed,” the Diamonds wrote. “We believe this is important to take advantage of current market conditions, especially if interest rates continue to rise.”

Edgewater Village has been in the works for years and then was set back by the recession before the first houses were built along the north end of Main Street. Now it looks possible that the whole complex of 60 new residences on the site of a former cannery and fish processing plant could be finished in about two years. (hh)


7 responses to “Edgewater Village: A push to finish”