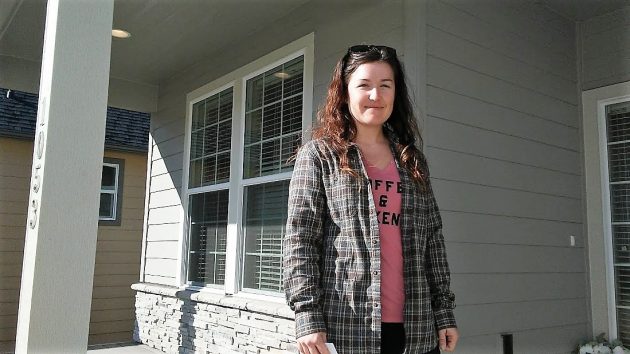 On Monday, Rainie Wheeler was just moving into the first of two riverfront houses to be built at Edgewater Village.

Time for an update on Edgewater Village, the new neighborhood on Albany’s riverfront that’s on my favorite bike route. A moving truck attracted my attention Monday.

It caught my eye because it was parked at one of the first two houses to be completed facing the riverfront and the Dave Clark Path. CARA, the downtown urban renewal district, had been particularly keen to have these houses constructed.

When I stopped, I met Rainie Wheeler, who was renting the house to live there with her two young sons. Like its neighbor, the house has a 440-square-foot garage and 1,839 square feet of living space, with three bedrooms and two and a half baths.

Wheeler is a logistics officer in the Oregon National Guard and works for the Guard in Salem. She has lived in Albany four or five years and, taking a brief break while instructing the movers, told me she is delighted with the location and the interior of her new home, and finds it’s a fairly easy commute to her job.

Both the riverfront houses — same size but different interiors and priced in the “mid-high 300s” — were finished a few weeks ago. The other one remains for sale.

CARA supported the Edgewater development with an initial investment of $2.4 million several years ago, and then a payment last year of $315,600 toward street improvements. (The latter represents the city’s share of street work along a vacant acre it owns in the development.) The initial investment was turned into a loan that is being forgiven in stages as houses are completed.

Over the years since CARA first encouraged developer George Diamond and his predecessors to take it on, this project on a former industrial site faced considerable headwinds, resulting in adjustments in the financing arrangements and the number of units to be built. But on the Edgewater website, Diamond sounds enthusiastic: “The City of Albany is incredibly progressive and has invested $8 million in its downtown landscaping and infrastructure, further paving a way for great restaurants, shopping and office to make this a great place to live.”

On the Clark path, it’s also an interesting place to ride past and witness the changes taking place. (hh) 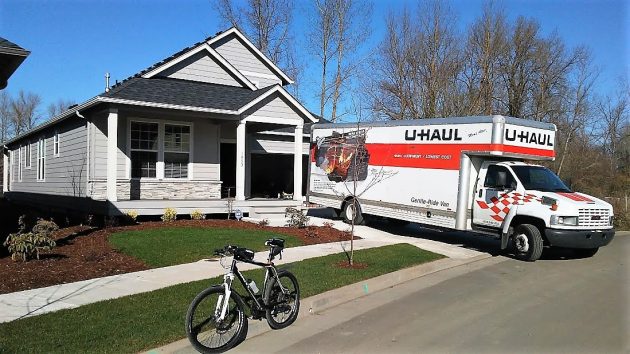 The moving truck is what made me stop on my Monday ride.