Edgewater: No apartments after all 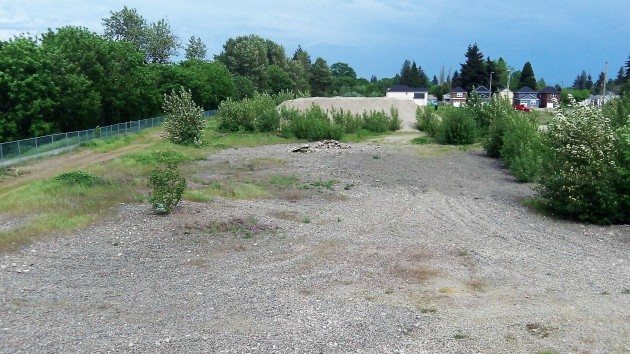 This vacant former industrial land is part of Edgewater Village, whose first five houses and two under construction can just be made out in the distance. The riverside Dave Clark Path is beyond the fence on the left.

It now sounds as though apartments are not in the future after all for Edgewater Village, the private riverside housing development in which Albany’s urban renewal agency invested $2.4 million.

In December 2015, developers George and Paula Diamond of Lake Oswego told the Central Albany Revitalization Area advisory board they’d like to change their most recent plans for 60 single-family units and build multiple-family units instead. Board members said they would consider it and asked the staff and the Diamonds to work out the details.

This week, on Wednesday, Diamond appeared before the board again. He said he decided against changing the plans and wanted to go ahead with the most recent one, which called for a mix of houses and town houses. But he would need an extension of the deadlines set by CARA, which called for the housing construction to be complete by 2018. The details of an extension will be worked out between the developers and the city staff and then be presented to the board.

Under the terms of CARA’s partnership with the Diamonds, the city’s investment of $2.4 million is in the form of a loan that is to be forgiven in stages at the rate of $40,000 per unit as houses are completed. The first five were finished on time last year. The contract calls for 10 additional units to be finished by Aug. 30, 2016; another 10 by the same time in 2017, and the final 35 by the end of August 2018.

The Edgewater Village saga began when an abandoned packing plant on the site burned down in 2006 and the city started looking for a developer for the nearly 6-acre site. It now appears the 10-year-old story will have a few more years to run. (hh)


12 responses to “Edgewater: No apartments after all”