Edgewater gets backing to carry on 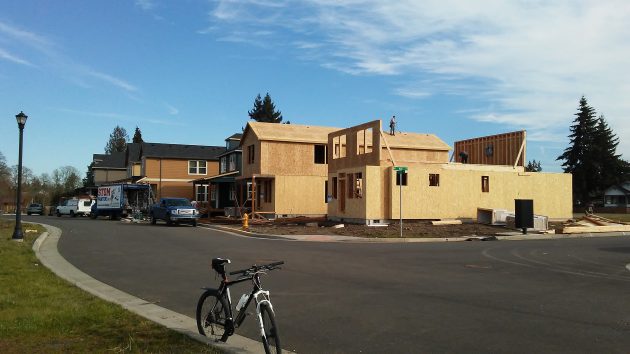 Work continued Monday on houses Nos. 12 and 13 at Edgewater Village.

George Diamond says he’d like to continue building units at Edgewater Village near Albany’s Willamette riverfront. And now he can. The advisory board of CARA, the downtown urban renewal district, Wednesday approved a change in a loan agreement that will allow the developer to obtain millions in private bank financing to continue construction.

The agreement covers an original $2.4 million loan the district gave the development years ago. About $400,000 has already been forgiven at the rate of $40,000 per completed house. The new change now subordinates the remaining loan amount to any claim a bank might make to cover the additional construction financing that’s necessary to continue and eventually complete the project, up to $6 million.

The CARA board veered off into a discussion of why the houses already built have not found buyers; they’re being rented instead. The reasons cited included the price, the neighborhood and the units’ design. But some board members, including Councilman Ray Kopczynski, pointed out that what’s being built there was what city officials insisted on. And board member Mark Spence said CARA’s goal was and remains to have dwellings filling in the former industrial site.

The CARA board also endorsed a request by Edgewater that the district help pay for street and utility improvements adjacent to a city-owned parcel smack in the middle of the six-acre development. Albany obtained the roughly one-acre chunk of railroad property from BNSF at no cost when it negotiated a new franchise agreement to cover the Water Avenue rail line several years ago. The original thought was to let the parcel be developed as part of Edgewater, but the city didn’t pursue that idea. The street improvements along the parcel are estimated at about $1.2 million, and CARA’s share is expected to be around $250,000.

The Edgewater agreement with CARA, negotiated before Diamond took over the development, obligated him to complete nine houses by the end of 2016. He finished 10. The 11th looks done from the outside, and the 12th and 13th are still under construction. The agreement says 15 houses must have been completed by the end of 2017, and 27, 39 and all planned 60 units in subsequent years, ending in 2020. Some will be townhouses, and others are to be larger single-family homes. (hh)