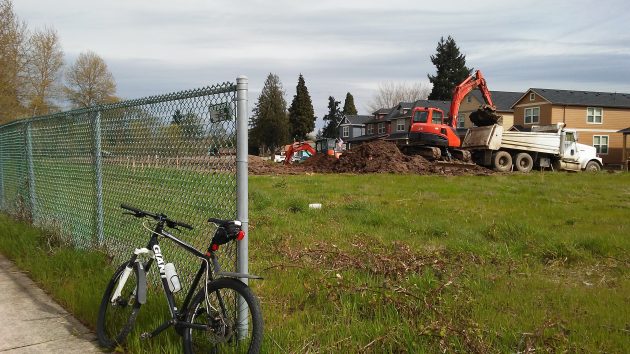 At Edgewater Village on March 28, excavating for the first two houses backing up to the Dave Clark Path.

Let’s check in once again on Edgewater Village. There, the Albany urban renewal program has just increased its investment in the project, and construction is under way on the first two houses along the Dave Clark Path.

As recommended by its advisory board in February, the city council, acting as the Albany Revitalization Agency or ARA, on April 19 approved a payment of $315,600 to the developer of Edgewater Village. The sum represents the city’s share of the cost of constructing public streets and related infrastructure adjoining a piece of city-owned property right in the middle of the development, across the railroad tracks from Water Avenue.

The city’s share is 16 percent of the total street and utility costs for the second and final phase of the 58-lot development between the railroad tracks and the riverside path. The developer, George Diamond, will pay the rest of the street costs or $1,677,115. The total was based on a bid for the work by BRX Inc. of Millersburg.

City participation in the street costs next to the vacant acreage, which Albany obtained at no cost from the BNSF railroad, helped Diamond get bank financing to complete the multimillion-dollar development. The CARA board heard Wednesday that the bank financing had been accomplished.

Several years ago the Central Albany Revitalization District invested $2.4 million in the property,  starting with cleaning up the 6-acre site after a fire destroyed a dormant fish-packing factory there. The amount has become a loan that is being forgiven in pieces as houses are completed.

Thirteen relatively narrow and close-together houses have been all but completed, and the CARA board has pressed Diamond to build some bigger units on the side of the property facing the river. That is now being done. (The last time I looked, a couple days ago, workers were building forms for the foundations.)

The houses along the path will be bigger than the ones already done. A flier available at the site lists them with an asking price of $367,800. The flier shows 11 of the smaller houses already built as having been sold. Diamond told the CARA board earlier they were being rented until they sold. (hh)