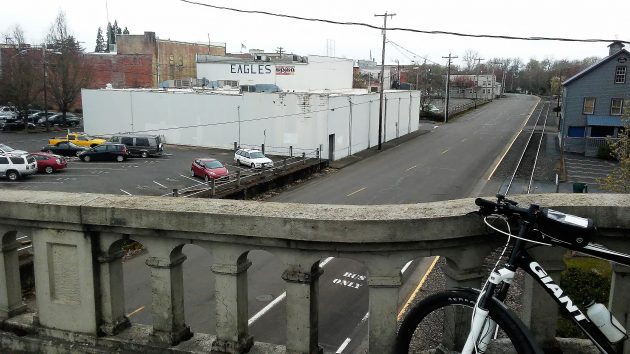 The Albany Eagles building as seen from the Ellsworth Street Bridge on the first of this month.

The Albany Eagles have put their lodge building up for sale for an asking price of $950,000. But the city’s downtown urban renewal advisory board showed no interest when this came up at a meeting last week.

Seth Sherry, the manager of the urban renewal program for the Central Albany Revitalization Area, told the board that the building had been listed. No one said anything, and the meeting moved on.

The month before, the board had said it would be interested in exploring purchase of the building if the Eagles wanted to sell it. The board also had asked Sherry to see if the Eagles would grant the city a first right of refusal in the sale. The lodge is not interested in that, Sherry said, and the topic was dropped.

A downtown development plan from 2011 called this a key property, envisioned to become a parking lot and eventually hold a multi-story parking structure. But the CARA board evidently is not interested in the property at that price. At least it wasn’t last week.

Lodge members got a message on Facebook on March 13 saying appraisers had been through the building and a “potential buyer” had walked through it.

The message, from Ernie Briggs, went on: “There are rumors that we are closing that are not true. Our goal with this committee (is) to sell our current building and concurrently obtain another site with a smaller footprint and more energy efficient building, with enough space to be an event center. Our goal is to minimize any time the club will be closed between selling and transitioning to another site.”

Real estate agent Gary Brown has the listing for the building. His listing says the place has a large ballroom, kitchen, two bars, several offices, and two restrooms on the ground floor. Upstairs, there’s a large meeting room, a bar, and two more restrooms.

The listing says the building is being offered “as is.”

While the CARA board did not pursue the subject last week, it’s always possible it might change its mind. (hh)


9 responses to “Eagles lodge for sale, but CARA shrugs”