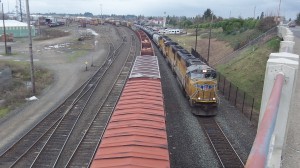 A Union Pacific freight pulls out of Albany. If coal trains ever come about, could they use covered cars like those parked in the yard?

Coal dust? We’ve heard a lot about dust in the propaganda campaign against coal exports via ports in Oregon and Washington. Now we have another clue that this is a phony issue, dreamed up to stop the export plans on the grounds of climate change.

The clue comes in a March 1 story in the Oregonian. The chairman of the Multnomah County Commissioners had asked his county health officer to write a report on the health effects of coal trains running through the Portland area. The report came out, and it said the health department couldn’t estimate any health effects because data on “coal dust dispersal” was proprietary and not available.

The story about this in the Portland paper, though, added a significant detail. Coal trains have been running  through Washington state for decades, it said, on their way to export terminals in British Columbia. And it quoted an industry group to the effect that no complaints to regulators had been made. At http://www.noc2healthcare.com/levitra-generic/ you find generic Levitra soft tabs Vardenafil 20mg.

Now that’s interesting. If coal dust from passing trains were a problem, you’d think it would be a problem in Washington and B.C. just as much as anywhere else. And if it were a problem, surely somebody would have complained, and regulators would have gotten involved. If they had, the Multnomah County health official would have found their reports. But he didn’t find any. All of which points to this conclusion: Rail shipments of coal cause no big problems with dust. The opposition to coal trains based on dust seems to lack any basis in fact. (hh)

Kathleen Dodge, via Facebook: But I have been reading that there is not enough data available to make a firm conclusion.  Also, coal dust particles can definitely get into streams and rivers. No one will see the effects of that immediately, and of course there won’t be any complaints.