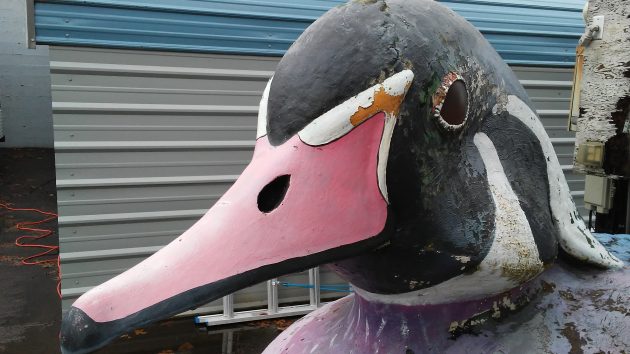 The Waverly Duck as it looked in storage last month.

Things are looking up for the Waverly Duck and its Albany fans. It now appears conceivable that, if private money is raised, the floating creature can be repaired and eventually restored to its berth in the middle of Waverly Lake.

At the request of Mayor Sharon Konopa, the city council last month agreed to accept the polyurethane creation as a gift from the widow of Mike Briggs, its most recent owner who died last October. But no city funds were to be spent.

Tethered to the bottom, the duck, 13 or 14 feet long, floated in Waverly Lake for years. It became sort of an attraction to visitors and residents alike. But it was pulled from the pond in 2007 because it was getting in pretty bad shape. In  recent years it’s been stored out in the weather on a former car lot on First Avenue, now the headquarters of Corvallis Tree & Lawn Care. The business owner, Mark Pickens, told me last month he’d be glad to keep storing the thing until somebody decided what to do with it.

Since the mayor brought up the subject in early January, the city parks staff has had a chance to examine the duck’s condition. Parks and Recreation Director Ed Hodney gave me an update: “My guys have assessed the condition of the duck and determined that it is in fair shape. Needs some patching and then a durable new paint job. I have asked them to give me a complete estimate of initial and then sustained annual maintenance expenses. I’ll let the mayor know when those are ready, then a ‘Go Fund Me’ or other private funding campaign can be launched.”

As for the ownership issue, that’s been settled. Konopa says the paperwork transferring ownership to the city has been completed.

So, it looks like it’s just a matter of raising the amount needed to return the duck to its element and keep it there. We’ll know if it’s feasible when we find out how much this is likely to cost. (hh)