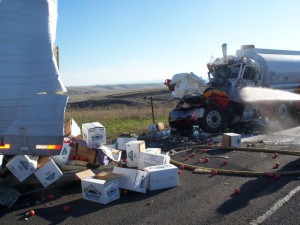 The state police said this was the result of distracted driving on I-84 near Pendleton. (OSP photo)

If you’re driving a truck down the interstate, how do you fail to notice another big truck and trailer right in front of you? You might miss seeing it and then run right into the back of it if you’ve been looking down at your cell phone instead of straight ahead through the windshield. At least that’s what the state police said on Monday, when they reported on a collision that morning on Interstate 84 near Pendleton.

Both truck drivers had to be treated at a hospital, and so did the wife of the one in front. He had slowed down to 5 mph because of two flat tires on his trailer, which was loaded with apples. The poor guy was cited for driving an unsafe vehicle, and the driver who slammed into him for following too close.

The state police used the occasion to point out that April is “Distracted Driving Awareness Month.” (Believe it or not; there’s a month for that.)  And the police say that while there are many ways to become distracted while driving, using a cell phone is among the most common.

I don’t know about that. Seems like the direct cause of this wreck was not using a cell phone but the driver taking his eyes off the road. And that’s what makes it easy to recommend how to avoid causing an accident. It’s simple: No matter what else you are doing while driving, keep your eyes on the road and your hands on the wheel. (hh)