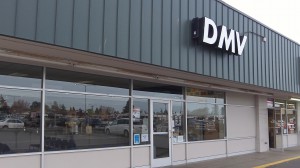 DMV offices like this may be busier when the driver-card bill takes effect.

Illegal aliens in Oregon will be allowed to obtain state driver cards starting in the fall, when Senate Bill 833 takes effect 90 days after the legislature adjourns. From a practical perspective, this is a good thing. It takes us back to the situation that existed before February 2008, when Oregon started requiring proof of citizenship or legal presence in the country in order to grant or renew a driver’s license.

Tens of thousands of illegal aliens live in Oregon, most of them working at jobs, and driving back and forth to work. This new law won’t change much of what happens on our roads, but it does have some budget impact. The DMV expects a 4 percent increase in the number of transactions, which amounts to about 41,000 more transactions over two years. It also expects to be deluged with a backlog of 84,000 driver card requests in 2014, accounting for those who couldn’t get a license since 2008.

Together with fees for the knowledge and driving tests, the price of one of these four-year cards totals $78. The bill says the DMV can’t spend more than $4.7 million on the program in 2013-15, but if my rough calculations are right, it should take in quite a bit more than that in fees.

That’s the practical side of this bill. As for the political significance, the law change confirms what we already know: Immigration law is an oxymoron. A law that’s not enforced is hardly a law at all. It’s a joke. (hh)

D’Ann responded on April 30: Sigh… and I kinda, sorta think there are gonna be at least a few “unintended consequences” ….