In line at the drive-through in winter, with the engine running for convenience and heat.

In Albany and the rest of Oregon, most of us are content to burn fossil fuels as long as they last, but when it comes to production, we want nothing to do with that.

In the drive-through line of the West Albany McDonald’s, with the motor running, it’s hard not to think of the fuel being wasted just sitting still. We have gasoline to waste this way because it’s being produced in large quantities, but only somewhere else. Not a drop is made in this state.

The main reason is that whatever other natural resources we have, petroleum is not among them, not on land and not off shore. So it was easy for the legislature to decide in 2007 and again in 2010 to ban oil exploration in Oregon’s territorial ocean waters, and to make the ban permanent by passing another law this year.

Without the passage of Senate Bill 256 last March, the ban on exploration for oil and gas within three miles of the Oregon coast was set to expire at the end of this month. But the bill sailed through the Senate 23-6 and passed the House 47-8. (The mid-valley’s Sherrie Sprenger of Scio and Shelly Boshart Davis of Albany were among the Republican votes against in the House.)

As you would expect, groups from the Audubon Society and the Nature Conservancy to the Sierra Club and the Surfrider Foundation supported the permanent ban. So did the Port of Toledo and the City of Portland. No one submitted written testimony against it.

The only word from industry came from a Portland lawyer for the Western States Petroleum Association, who said in an email: “There is no oil production or refinement in Oregon, on or off shore.”

So even without the permanent ban on drilling, we would never see anything like this when we look seaward on the Oregon coast: 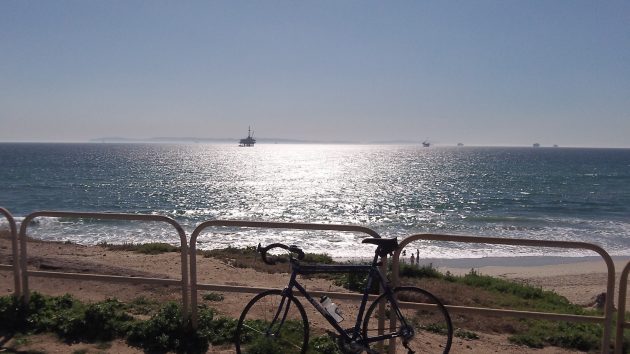 From the coastal bike path in Huntington Beach, Calif., you could see a couple of oil rigs in 2015. The other dots on the horizon are ships.

Of course, some of us might not mind a few rigs if we got reliably sunny beaches and warm surf as part of the deal. (hh)