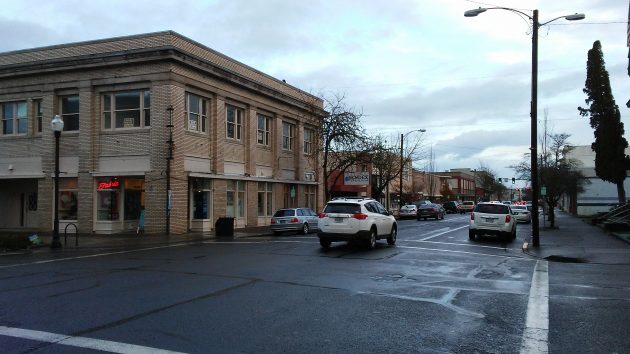 Like this section of Second Avenue, Albany’s downtown streets look a little drab, especially in the fading light of a rainy November afternoon. But maybe not for long.

The city engineering staff on Wednesday gave the advisory board of the Central Albany Revitalization Area a refresher on the design of “streetscape” improvements planned for several blocks of Second and Third avenues and Broadalbin, Ellsworth and Lyon streets. The work, estimated to cost $8 million or more, is to be done in 2017, to be finished in September.

Other than debating the spacing of flagpole holes in the new concrete sidewalks, there was little discussion of and no disagreement with the design details as laid out by Lori Schumacher and Chris Cerklewski of the engineering staff. Among the elements of the upgraded streets, besides new pavement in the travel lanes, are “double acorn” lights (six per block on Second, Third and Broadalbin), “catenary” lights suspended on wires over the streets (two per block), banner poles, and furniture such as benches, trash cans and bike racks.

The streets will get 12 new trees per block, of the linden and zelcova varieties. There will be curb extensions or “bulbouts” at the corners, but no parking will be lost as a result.

Lyon and Ellsworth will get full sidewalk replacements on the northernmost two blocks, and less extensive sidewalk work the rest of the way to Eighth. The design also calls for new single acorn lights and trees. City engineer Staci Belcastro told the board that ODOT may have some money to help pay for the sidewalk work along these legs of Highway 20, but the details are still up in the air.

The first part of the project will redo the streets around three sides of the Albany Post Office near the new carousel building. There, and only there, the board decided earlier on diagonal parking, and it will be of the back-in kind. On these blocks, construction is to start after the first of the year and be finished in March 2017. (hh)