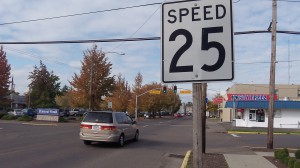 ODOT says the speed limit on Lyon Street should be 20, not 25 miles per hour.

Of all the things to worry about, the speed limit on Highway 20 through downtown Albany is at the very bottom of the list. Especially if the choice is between very slow at 25 mph or even slower at 20. But as ODOT explains it, when they talked with the city about “decommissioning” a crosswalk at the former St. Mary’s School, because the school has closed, they discovered a discrepancy in the posted speed of the Highway 20 couplet: 25 mph on Lyon Street, the northbound leg, and no posting on Ellsworth, going south.

Turns out that state law automatically sets 20 mph as the limit in a business district, and the state traffic engineer wants the city to post it as such. But the city may request a “speed zone investigation,” which can override the statutory limit. This is going to take some time, so ODOT spokesman Rick Little says: “Bottom line, no speed changes for motorists now. The speed investigation will determine whether to maintain the statutory posting of 20 mph or an order for a different speed, such as 25 mph, to be established. The city will then determine if it agrees with the recommendation so the order can be issued.”

To drivers it makes no difference. When traffic on Ellsworth and Lyon is heavy, it is always slow, and who cares what the speedometer says at such low speeds? When there is little or no traffic, at night for example, the speed limit is not important either.

And as for that crosswalk? It’s very important to parishioners of St. Mary’s, who without it would have trouble getting across the street to church. (hh)

Rhea Graham:  ODOT should concern itself with the bushes planted in the median at the head of Lyon, near the underpass (in front of The Depot restaurant).  Heading west you can’t see what might be coming if you are in a compact car and aren’t very tall. The shrubs are too tall, a ground cover would be more appropriate.