Downtown site: From tavern to church? 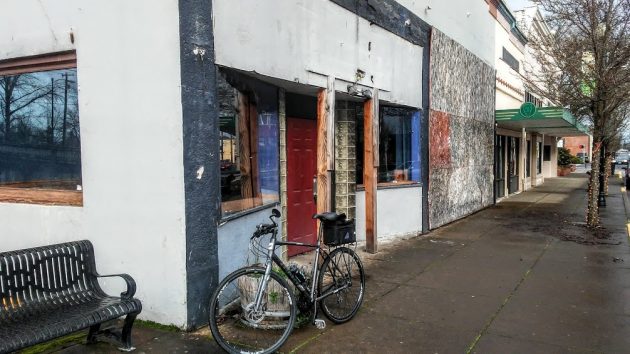 Late in 2018 it looked as though this blighted storefront in downtown Albany might some day be fixed up. It hasn’t happened yet,but its new owner may be thinking of the building as a future church.

The structure is about 100 years old and most recently housed a restaurant and tavern called Espalon, which closed for remodeling about four years ago. When the renovation was attempted in September 2016, part of the front wall caved in, and other than shoring it up, the work stopped.

When last I checked on what was happening with the property in September 2018 (you can read the story here), the building was owned by a man living in Las Vegas. In December 2018, he sold the property for $175,000.

Linn County tax records list the current owner as “Jesus Revival Association,” with an address in Salem. The county, by the way, shows a market value for the property of $256,530 and an assessed or taxable value of $205,510. Property taxes were paid through 2018, but the $3,673 bill for 2019 remains unpaid, according to the records available online.

At the county tax department, Administrative Assistant Heidi Tandy told me Thursday that the new owner had applied for an exemption from property taxation “as a religious entity but did not qualify based on lack of use.”

Presumably the property would become exempt from property taxes if it is turned into a church and used as such, but it has to be fixed up first. I had no way of reaching the owner by phone, so the latest plans for the building remain a mystery to me.

Except for a lonely gumball machine, someone has picked up on the inside, it appears. But the outside remains as it was, with timbers bracing up the top of the front wall. (hh)

Looking through the window at the vacant space inside 129 First Ave. N.W.


4 responses to “Downtown site: From tavern to church?”