Downtown signs: Which way to turn 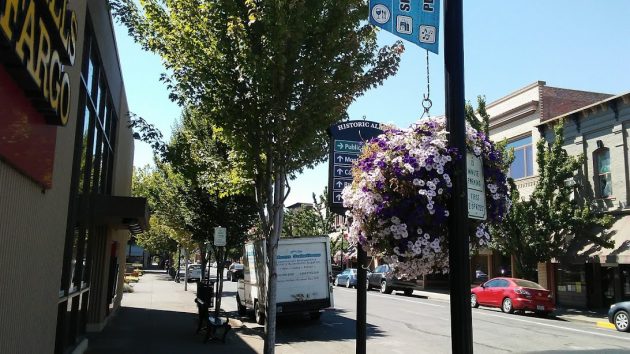 Which way is what? Looking up at the new wayfinding sign on First near Broadalbin.

Strangers wandering around downtown Albany on foot now have handsome signs to tell them where to go. If they can see the signs, that is.

Installation started this week of 20 “pedestrian/sidewalk” signs. It was about five years ago that the Central Albany Revitalization Area (CARA) advisory board first approved this “wayfinding” project as a way to enhance the downtown tourist economy.

The initial budget was for $75,000. Eventually, in September 2017, the CARA board and the city council, as the Albany Revitalization Agency or ARA, approved a $100,209 contract with the Eugene Sign & Awning Co. to fabricate 27 wayfinding signs, 20 for sidewalks and seven bigger ones to be seen by drivers on the downtown couplet of Highway 20. This March, CARA allocated an additional $26,605 to get the signs installed.

I hadn’t seen the signs until City Manager Peter Troedsson reported on the installation in a Thursday report to the city council. Friday I went looking and found at least three. High above the heads of people on foot, two of them were partially obscured by the luxuriant flower baskets the Downtown Association is kind to maintain.

I’m also wondering about the directions given. One sign, on First in front of the soon-to-be vacant Wells Fargo Bank, points west to “restaurants.” There are a couple of restaurants that way, but there are more, and closer ones, in the opposite direction.

When CARA was discussing this years ago, I remember a skeptic asking whether in the age of the ubiquitous mobile device, it made sense to spend money on overhead signs when every tourist under 75 walks around looking down at the maps and GPS directions on his phone.

As for the bigger signs on the highway, at last report the installation of those was still waiting for permits from ODOT. Presumably those signs will not be obscured by an abundance of summertime flora, so they’ll be easier to see and read. (hh) 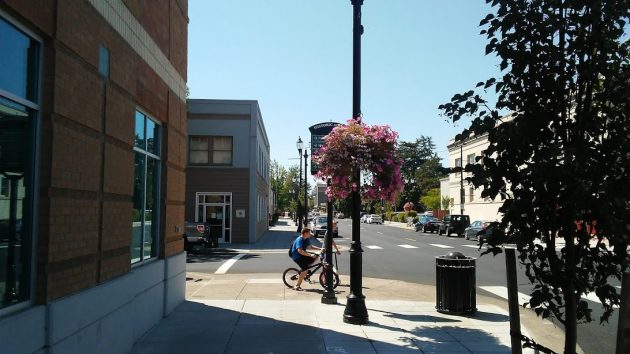 Outside City Hall at the corner of Third and Broadalbin, the sign is hard to see from a distance, but … 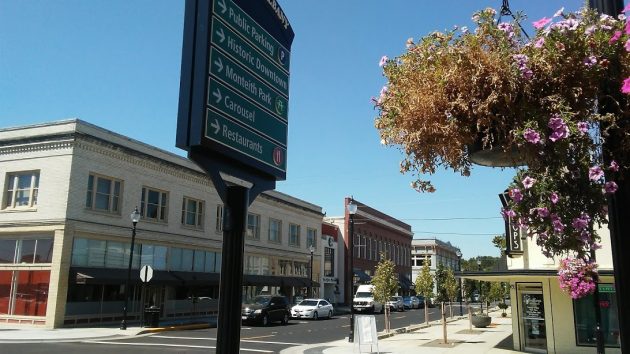 … when you get closer, you can see what the sign wants you to know.

11 responses to “Downtown signs: Which way to turn”