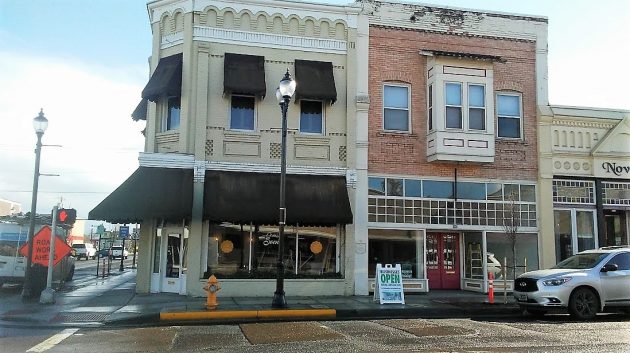 These two buildings will get a facelift, including brick work, with help from CARA.

The corner of Ellsworth and Second in downtown Albany now looks mostly old and worn out. With help from the downtown urban renewal district, it soon will have a fresh appearance while retaining its old-time look.

The Central Albany Revitalization Area (CARA) last week approved grants of $10,000 each to help owner Seth Fortier upgrade the outside of buildings at 202 and 206 Second Avenue S.W. The 202 address on the corner used to house the Tripp & Tripp real estate office. The store at 206 was long occupied by Jeff Senders’ stained-glass business.

At the corner, the plans call for new awnings and new paint, along with caulking and so forth, at a total cost of $21,000. Next door, the owner will have contractors repair the brick and plaster walls on three sides and then paint them. The cost is estimated at $110,000. Christina Knowles of Varitone Architecture, also based downtown, did the design for both buildings.

CARA has a program to help revitalize downtown storefronts, and the grants will come out of that part of its budget. Overall, CARA is ultimately funded by property taxes sidelined from other taxing units such as the city, county, school system, and community college district.

Previously, last December, CARA approved a $50,000 five-year loan to business owner Jolene Wilson, who is working on opening a bakery and sprinkles factory in the former real estate office. I saw her painting shelves or something in there last week, knocked on the door and asked when the bakery would be open. She said it might be summer before cupcakes and other goodies will be for sale.

CARA last week also approved a $5,000 grant to Daren Clowser, owner of the former Knights of Pythias lodge building at 230 Lyon St. S.W. He asked for help toward fixing up parts of the upper floor, where there are 14 apartments. Last year Clowser got a $10,000 CARA grant toward repairs and other work on the outside of the historic building.

Bit by bit, the core of old Albany is being refreshed. It all goes along with the downtown streetscape project ($9.8 million at last report), which will be completed this summer.

An irony: I remember that it was Jeff Senders who years ago pushed hard for improvements on Second Avenue like those then being completed on First. Now that the work is being done, his shop, sadly, is no longer there. Jolene Wilson told me a coffee shop will fill the space instead. (hh)


19 responses to “Downtown revival: Another step”