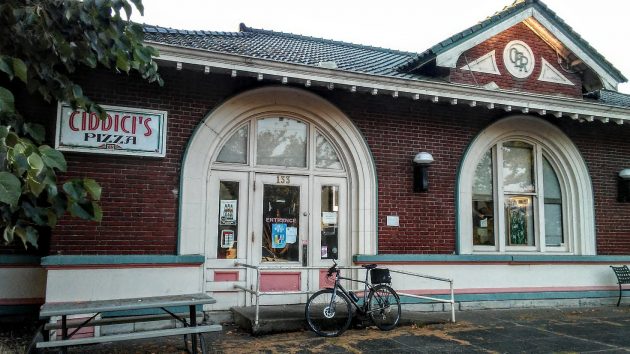 Along with other signs, the March eviction notice remained on Ciddici’s front door on July 29.

On the social media app Nextdoor, someone asked whether Ciddici’s Pizza in downtown Albany would ever reopen. I had wondered about the same thing and this week tried to find out. The short answer is: Who knows?

As I reported in April, when I became aware of the situation, the downtown business in the historic Oregon Electric Railway depot was forced to close in early March because of a court-issued eviction order.

The eviction was the result of a civil lawsuit over unpaid rent on the building. The building is owned by T&H Investment LLC, of which Tariq “Tim” Siddiqui and his brother Hamid are the owners, and which Tim manages. T&H filed the suit over rent against Chanda Corporation, managed by Hamid and doing business as Ciddici’s Pizza.

Tim had started the pizza business many years ago in the old PayLess building. Hamid rook over the business when Tim returned to his native Pakistan six years ago and has lived in Karachi since.

Via Facebook texting, I asked Tim about the status of the downtown pizza store last week. He replied: “I am seeking to dissolve the LLC that owns the property and sell it. There is mediation/arbitration at the end of September. Hamid has the sole authority over the business, and I don’t know what decision he will make to secure access to the property.”

Still based in Karachi, Tim said he was traveling to a city in north Pakistan and was hoping to be in Oregon in September.

I haven’t  reached Hamid. So whether Ciddici’s downtown will reopen and when, that’s up in the air. (hh)