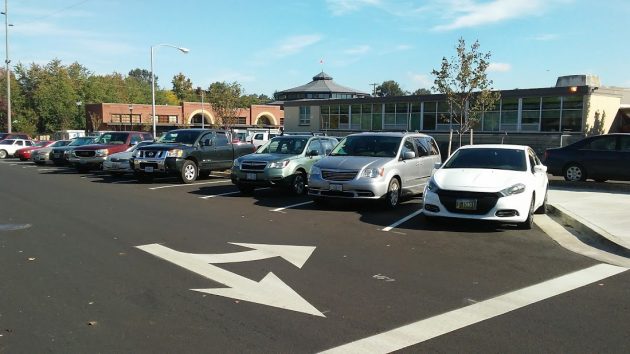 The parking spaces at issue are on the east side of Calapooia Street between First and Second. The post office building is behind the cars; the Albany Carousel in the background.

Downtown parking near the Albany Post Office and the new Albany Carousel will remain an issue for a while. That was clear from the city council’s discussion of the topic Wednesday night.

At the suggestion of Councilwoman Bessie Johnson and others, the council put off action on a resolution to label 19 new spaces on the east side of Calapooia Street between First and Second Avenue as “3-hour customer only” parking. The change was requested by the Downtown Association, which manages and enforces parking in the core area. The request was prompted by the new carousel, which would like parking for its volunteers, up to 24 of them per day, in three shifts.

Debbie Myers, president of the union local representing Albany letter carriers, pushed back, not just on the parking issue but the mayor’s notion that the post office should move. It’s a federal building and it’s not going to move, according to her. She also said postal workers bear the brunt of daily complaints about the new angled back-in parking.

The 19 spaces on Calapooia, along with about the same number again on First and Second, were built by the city as part of its downtown streetscape project. All are angled parking spots — back-in only on Calapooia and Second — that more than doubled the number of parallel spaces previously available on the streets around the post office.

The Calapooia Street spaces have for years been used by downtown workers including postal workers. Restricting them to three hours and customers only would force the postal employees who use them to park elsewhere. Myers told the council that letter carriers walk five to eight miles a day. Why would the city make a change that would force them to walk farther to their cars at the end of their day in order to make things more convenient for carousel volunteers? “I just don’t understand,” she said.

In the opinion of Councilwoman Johnson, “The post office is getting a raw deal here.”

Whatever the impact of the carousel on parking or other issues, it’s likely to get bigger. Gary Goby, the retired physician who has been a leading force in putting the carousel together, told the council this: During its first 32 days of being open, the carousel had more than 44,000 visitors. Of the 2,519 who signed the guest book, 72 percent were from Albany or the mid-valley; 9 percent from elsewhere in Oregon, 16 percent from other states, and 2 percent (48 people) from other countries. All this without any ad campaign or website promotions and only a minimal effort in social media. But in December, the carousel will promote itself with a billboard on I-5.

As for the parking resolution, Mayor Sharon Konopa said it will come back to the council, probably at the next work session on Oct. 9, and then at the next regular meeting on Oct. 11.

In the meantime, chances are the downtown assocation, the council and the carousel organization will no doubt explore other options, such as having the carousel obtain spaces available for lease and reserve them for volunteers. One or all of them might even talk with the post office employees before surprising them with a change that affects them more than most. (hh)

City Hall tells me that a post office manager (someone who is no longer there) was contacted early in the design phase that resulted in the back-in angled parking on two sides of the post office. Based on what I heard at the meeting, the original version of this story said the post office had not been contacted. (hh)