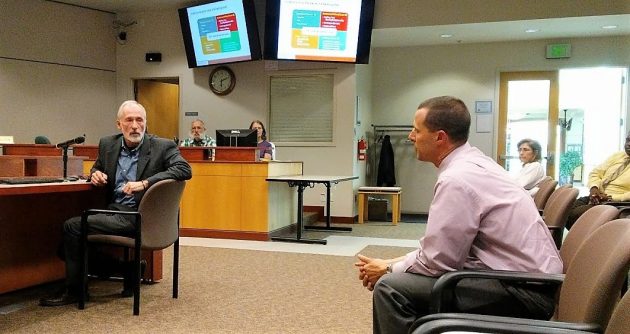 We’re all parking experts because, after all, we’ve parked vehicles in countless spaces thousands of times. On Wednesday, though, Albany city officials and others including me heard from a real expert, and listening to him was worth the time.

The speaker was Rick Williams, head of a Portland consulting firm that bears his name. The firm studies parking and transportation issues. Williams told the urban renewal advisory board and the city council lots of things, all of them important. For me, what he said about parking garages stood out because Albany has vague plans, on paper anyway, for one or two such structures downtown.

One of Williams’ points: Parking structures are expensive. Building one costs up to $35,000 per single stall. If it is financed with debt over 20 years, paying it off runs up to $240 per stall per month.

Studies have shown that users of a parking garage will walk no more than 750-800 feet to their destination. So, to have a chance at success, a garage must be surrounded for 800 feet in all directions by destinations that customers want to reach.

Williams cited a Portland parking garage that failed because is was built next to the Willamette River, meaning no destinations on that side.

A plan prepared for CARA, the urban renewal district, in 2011 proposed that a parking structure might eventually be built on the site of the Albany Eagles clubhouse. Williams didn’t refer to this plan, but his comments implied that building a structure on the riverfront there would be a mistake.

Because parking always comes up in discussions of downtown development, CARA may be asked to commission a downtown parking study. Williams said this might run around $35,000 for a town of Albany’s size. His firm has done scores of such studies for cities big and small, and if CARA wants one for Albany, his firm would be a logical choice.

Ahead of launching a review of its development code, the city had hired Williams to assess Albany’s parking standards for apartment complexes and senior care homes. His team found that at 14 apartment developments studied, there was more parking available than residents needed or used. This was so even at two older developments where the code now would require more spaces than were built. At the others, developers had built more spaces than demanded by the code.

The findings suggest that in the interest of more efficient land use, Albany may want to lower its off-street parking requirements for apartments. The extra space could be used for more housing units or anything else.

I missed the chance to ask this acknowledged expert what he thought of back-in angled parking of the kind the city installed last year on Second Avenue in front of the post office. If he gets hired for a downtown parking study, maybe I can ask him then. (hh)