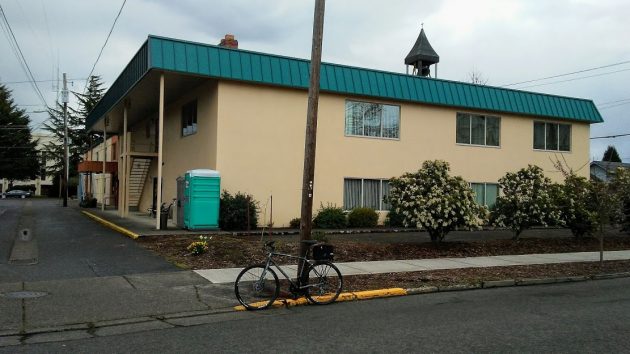 The portable toilet outside the First Christian Church in downtown Albany on March 23.

Will the portable toilet outside of Albany’s First Christian Church be allowed to stay? On Monday the city council didn’t say yes, and it didn’t say no. Instead, Mayor Sharon Konopa referred the question to the city staff for a report.

City officials insist the municipal code forbids “privies” not connected to the sewer system, but the code itself says the council can allow them for up to a year, and the council can also grant further one-year extensions.

Last fall, the First Christian and the United Presbyterian Church went together on the expense of having the outhouse set up in response to First Christian’s preschool staff noticing human waste on the grounds. Police saw the toilet some time later, and the churches then asked for city permission, which was denied.

On Monday, represented by Daniel Dietz of First Christian, the churches asked that the code be changed to establish objective criteria for granting or denying privy permits.

The council discussed it for a while. Bessie Johnson, Bill Coburn, and Dick Olsen were inclined to let the toilet stay while the code issue is considered. Rich Kellum and Mike Sykes were not. Kellum wanted to wait for the staff report before taking action, and Sykes said, “Rules are rules.” (Alex Johnson II also said something, but I couldn’t hear him. You can listen to the audio of the discussion when it’s available here.)

Mayor Sharon Konopa said allowing portable toilets on private property would open “Pandora’s box.” She is worried that allowing one would lead to many others, and this would undercut efforts to combat homelessness. If people are homeless, she believes, they should spend nights in homeless shelters, where they have access to showers and toilets, and not hang around downtown where there are no facilities.

Konopa expects the staff report she asked for to be ready in time for the council meeting on April 24.

I didn’t get an answer — none that I understood anyway — to this question: If the city code has a blanket prohibition of permanent privies without express council action once a year, what’s the legal status of portable toilets as permanent installations in several city parks?

As for the outhouse at First Christian, the city has not forced the churches to remove it, and City Attorney Sean Kidd told me Monday no enforcement action is likely right away. (hh)