Downtown intrigue: A man of mystery 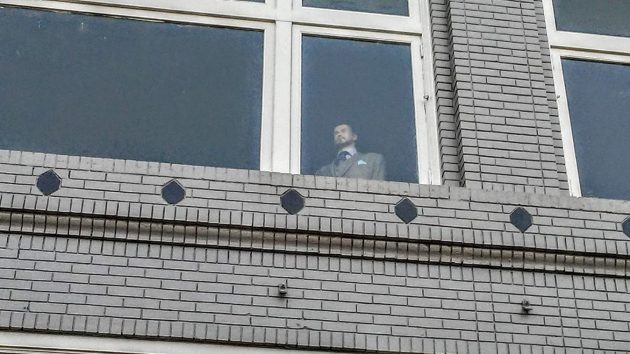 Who is that man? That dapper looking figure keeping an eye out from the window looking out over Albany’s Broadalbin Street below?

He’s been keeping watch there for some time, trying to be careful not to let passersby get too close a look at him. (Or at least he was on March 20.)

Why the caution? Who or what is he keeping an eye out for?

Is he trying to avoid someone? He’s being followed, see, and he’s keeping a lookout so that if his pursuer turns up, our man in the window has time to get away. Is that it?

Or is he making sure nothing happens to disturb the tranquility of the street below, decked out like a promenade with an extra wide sidewalk and places to sit? If it looks like something is about to go down, he’s in a position to let the authorities know.

Wait. The authorities? The way he is dressed, and the stern look on his face, maybe he is one of them. Maybe this is about the rumors you may not yet have heard: No more getting out of line for any of us, and the authorities are going to watch and make sure that nobody does.

On the other hand, maybe not. Maybe he’s just a mannequin that’s been stored out of the way on the second floor of The Natty Dresser, Albany’s downtown men’s wear store of renown. (hh)


5 responses to “Downtown intrigue: A man of mystery”