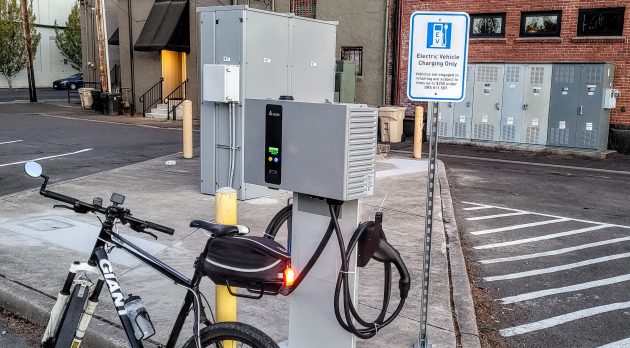 Looks like (because of the cable ties) nobody has used the charging station yet.

The last few times I passed the CARA-sponsored electric-vehicle charging station in downtown Albany, the device was still shrouded in black plastic. But Saturday night, the plastic was gone and the thing looked ready to be used.

It also looked like nobody had made use of it yet; the charging cables were still coiled up and held tight with zip ties.

But the little digital display was lit, asking users to make some kind of choice. (I’ve never plugged anything into one of these stations, so I have no idea how they operate or what the display was trying to tell me.)

As reported here several times, the Central Albany Revitalization District got the ball rolling on this, the first EV charger in its district. Paid for with a grant from Pacific Power & Light, the device was installed in the city-owned parking lot behind the Wallace Building that for many years housed Albany’s J.C. Penney store.

If you want the whole background, find any of the previous stories by using the search function on this site.

Then, if you have an EV, go try out this charger next time you’re downtown. It should be available most of the time, being as according to a sign, parking there without charging is subject to a fine of up to $250.

And, if you happen to be the first user, bring a sharp knife to cut those ties. (hh)


6 responses to “Downtown EV charger looks ready to use”