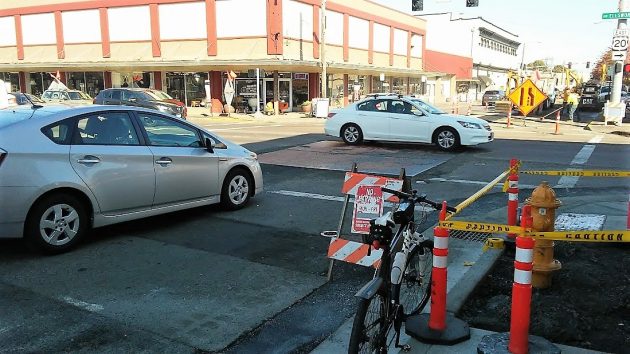 Construction work was going on Monday at the intersection of Second Avenue and Ellsworth Street.

As busy as the crews working on Albany’s $8 million downtown “streetscape” project have been, they’re not going to get it all done this year as city officials had originally hoped.

Since June, the construction company Emery & Sons has been digging up and rebuilding sidewalks and underground utilities in a project that covers about 26 blocks on seven streets. Mainly affected are the downtown segments of Second and Third Avenues and Ellsowrth and Lyon streets, plus single blocks on Broadalbin, Ferry and Calapooia streets.

I asked for an update on the project, which the city at first said — and still says on its website — should be done by December. But as project manager Lindsey Austin reminded me, officials told the Central Albany Revitalization Area board as early as June that the final repaving of the downtown streets would be pushed into spring and summer of 2018. Also in 2018, ODOT plans to put a pavement overlay on Ellsworth and Lyon.

Austin gave me a summary of the work so far: Sidewalks have been rebuilt on five of 11 blocks in the project area. This includes openings for tree wells and bases for light poles. Almost all of the stormwater infrastructure is completed. Electrical conduit has been installed almost everywhere, with only half of Lyon and Ellsworth left to do. Installation of curb ramps on Lyon and Ellsworth is under way. New water mains are complete on nine of the 13 blocks where they were scheduled.

Is the project more or less on schedule?

“It’s difficult at this point to provide a detailed update on the overall project schedule but we are in the process of looking at paving windows, completion dates, and hope to have another update go out this month,” Austin told me in an email. “I can share that tree planting is scheduled to start next month and will focus on planting trees in the new wells that have been completed on Second and Third Avenue. New light poles will also start to go up next month on Second and Third avenues. However, the power company won’t be able to provide power to ‘light’ the poles for a couple of months following their installation.”

As for everyone affected by all this, Austin says, “We really appreciate everyone’s patience and understanding as we move forward with the project.” (hh)