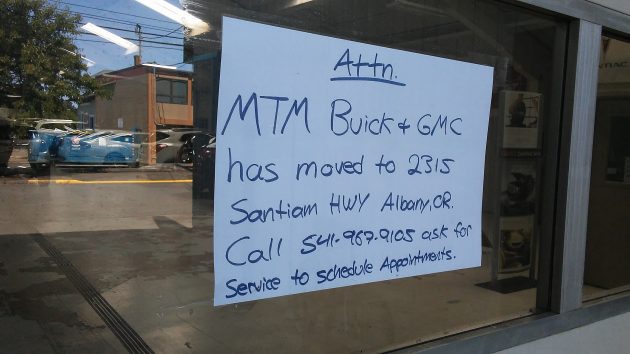 A sign on the service department door tells customers of the change.

Downtown Albany used to have several car dealerships, but in recent decades only one was left. And unless somebody starts a new one, the era of downtown automobile stores in Albany now is gone.

Mark Thomas Motors Buick and GMC, at 505 Ellsworth Street, has closed up and moved to the other MTM store on Santiam Highway. The downtown property is for sale, with an asking price of $1,990,000, according to the listing with Brian Oare and Associates.

I don’t know the reason for this change in the downtown business scene. When all the new vehicles had disappeared from the lot recently, I assumed at first they’d been moved to a sales event at the Expo Center or some place. And then I paid no further attention. Saturday I took a closer look but wasn’t able to reach anyone.

Some of the inventory was stored inside the service department, presumably waiting to be moved or sold elsewhere. 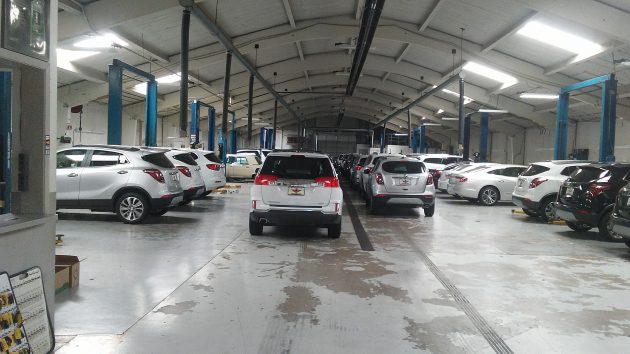 The property comprises the whole city block, measuring 1.36 acres, between Ellsworth and Lyon streets and Fifth and Sixth avenues. For many years I worked across the street in the newsroom of the Democrat-Herald. Often, walking to or from the office, I would entertain myself by admiring the trucks and cars on the lot and, especially, in the showroom window facing Ellsworth.

For several weeks in the winter of 2007 I admired a blue-gray truck in that window. It was a basic GMC Sierra with a standard cab, but with a powerful V-8 and a smooth transmission. I kept looking at it through the glass, until one Saturday morning I walked in and bought the thing.

It turned out to be a great truck, and I loved it more than any other rig I’ve had in nearly 60 years of driving. The truck got great care at the service department off Fifth Avenue, even after on one visit, the service technician checking under the hood reported the evidence of mice.

If they still make simple pickups like that, without frills, I would like to get one, one of these days. But if I ever do, sadly, I won’t be able to get it in the same place. (hh) 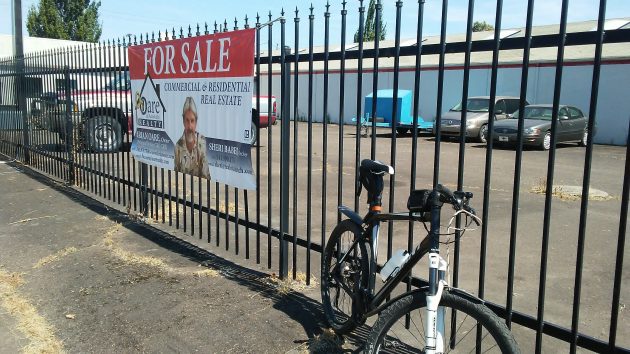