Downtown building due for upgrade 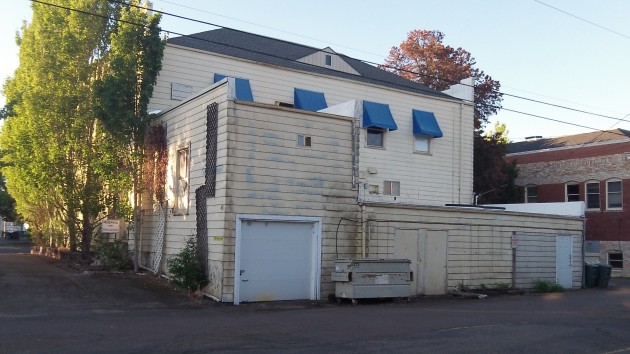 This doesn’t look like much now, just the shabby back side of the old Albany building at 420 Third Ave. S.W.  But it won’t look like this for long.

This past March, developer Scott Lepman got approval of a $336,000 contribution from CARA, the Central Albany Revitalization Area, toward what he estimates will be a $1.6 million project to rehabilitate this building for apartments and offices and construct a set of four townhomes on the lot next door (the left of the photo).

Lepman and his brother, Spencer, who handles the construction end of their projects, have submitted a plan for fixing up the exterior, which has to pass muster with the Albany Landmarks Advisory Commission. A hearing before the panel is scheduled for Aug. 6 at City Hall. (A public notice on the hearing, showing what the outside of the building is proposed to look like, is available on the city’s website at http://www.cityofalbany.net/images/stories/cd/planning/planreview/HI-04-14/NF_HI-04-05-14-nph-web.pdf.)

Among other things, the plan calls for the low structure at the alley side of the building seen here to be turned into four garages. Also, the aluminum siding is to be replaced with cement siding, and the entry stairs on Third Avenue will be modified. In the renderings available online, the proposed paint scheme looks like gray with white trim.

The building dates from 1930, when it was constructed as the Fortmiller Funeral Home. In the 1970s it was converted to offices, and in recent years it has been mostly empty. The property was in a bank foreclosure when the Lepmans acquired it this spring with the view toward salvaging the building and making it new again. (hh)