Doomed or not: Inside Cumberland Church

Last time I saw the inside of the former Cumberland Presbyterian Church in Albany it was a jumbled mess, used for storage and not much else. As the video below shows, on Saturday the inside was still old and worn, but picked up and clean.

Volunteers from the east Willamette Neighborhood want the city council to help save the church. They spent three days moving the stored stuff out of the way and generally cleaning the place up before visitors got a look inside on Saturday’s tour of historic houses.

The city of Albany has owned the building at Santiam Road and Main Street since buying the property for $150,000 in 2000 to make room for a street project. On July 9 the council voted 4-2 to try to find a buyer who would move the building to a site not owned by the city.

Last year a mayor’s work group recommended moving the church a short distance up Santiam Road to city-owned land near Hackleman Park and restoring it as a community center to be run by the parks department. But the proposal went nowhere. Four council members — Coburn, Johnson, Kellum, and Sykes — don’t want to obligate city funds for a costly move and restoration, or long-term maintenance expenses, in view of the city’s many other obligations.

Supporters of saving the church are not ready to give up. They started a website (savethecumberland.us) and are encouraging people to contact the council. Maybe they are hoping to flip at least one of the four opponents. That would yield a 3-3 council deadlock, which Mayor Sharon Konopa could break in favor of going ahead with the move and possibly the restoration, using urban renewal funds from CARA, the Central Albany Revitalization Area.

The church was built in 1892 and later enlarged with the addition of the middle section. As visitors Saturday could see, the inside has been chopped up with partitions and false ceilings. The colorful windows remain, but the stained glass suffers from a sloppy exterior paint job.

For now, the council has asked parks Director Ed Hodney to keep exploring a sale of the property to the Baldwin construction company,which has its offices next door. No word on the progress or outcome of that. (hh) 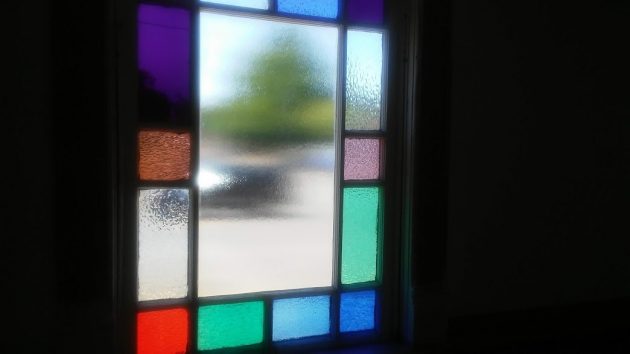 One of the windows at the Cumberland Church. This one faces Main Street. 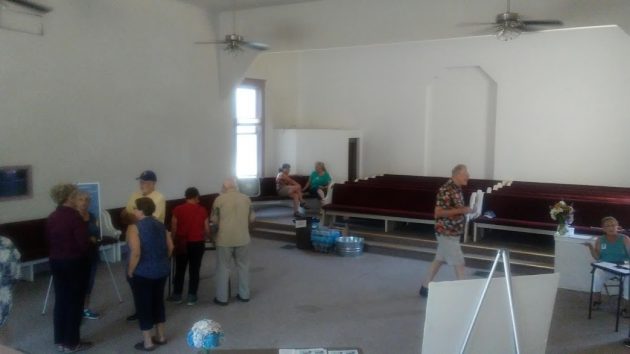 The main room. Pews have been moved to a raised section of the floor.


9 responses to “Doomed or not: Inside Cumberland Church”