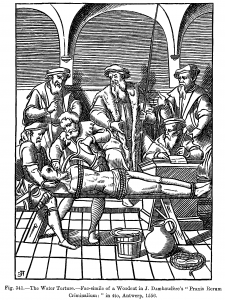 Water torture centuries ago: Wrong then and wrong now.

It’s distressing to hear conservatives on cable TV defend the idea that it is ever OK to torture prisoners. The term now is “enhanced interrogation techniques,” but the euphemism is far too vague. It covers everything from keeping prisoners isolated between interrogations to near-drowning or shackling people, naked, to the ceiling for hours at a time.

The apologists for the more severe kinds of physical abuse defend it on the grounds that it may have, and perhaps did, save American lives after 9/11. They fail to see this: If it’s OK for us to abuse prisoners to save our countrymen, then it would have been OK for our enemies to abuse captured Americans — such as pilots downed in North Vietnam — to extract intelligence to save their countrymen from more bombing.

The apologists also compare the misery and death that war fighting always inflicts on civilians and children, and they ask: If Obama has no problem killing innocents with drone strikes, how can he complain about inflicting discomfort or even pain on suspected or actual terrorists? The difference is intent. Drone attacks don’t intend to kill innocents, though that’s the inevitable result, which is why aerial attacks are morally questionable. But inflicting harm on a helpless captive is in a whole different category of reprehensible conduct.

That much should be obvious. In addition, consider this. Based on written evidence from CIA records, the report by the Democrats on the Senate Intelligence Committee concluded that of the 119 individuals held in CIA custody from 2001 to 2009, 39 who were known to have been subjected to the enhanced interrogation program produced no intelligence while in CIA custody. Other detainees did provide “significant, accurate” intelligence before or without being subjected to the techniques. And “multiple” detainees, under duress, provided information that was fabricated.

Then there is the distasteful money-making element. The committee report said two psychologists advised the CIA on the interrogation program. In 2005 they formed a company and got a government contract, and by the time the program was terminated in 2009, they had been paid $81 million. (Contractors, the report said, made up 85 percent of the workforce in the CIA detention and interrogation program.)

By the way, of the 119 known detainees, at least 26 were wrongfully held. The report does not say whether any of the 26 were mistreated other than being wrongly incarcerated. But if any were, put yourself in their position. These kidnap victims had nothing to tell their interrogators and yet were subject to possible torture if they kept mum. How can anyone justify that?

Much of what the declassiied executive summary of the Senate report confirmed had already been reported and then stopped, years ago. So there was reason to question the wisdom of bringing it all up again. But there is no reason to defend the abusive practices themselves. (hh)