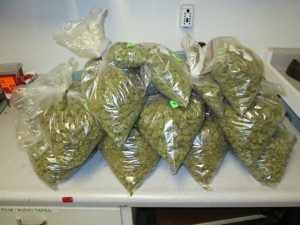 The state police released this photo of marijuana seized Thursday.

The illegal trade in marijuana flourishes in Oregon, as shown by the steady pace of arrests for selling, transporting or possessing quantities of weed. The legislature tried to cut into at least part of that business but is getting push-back from local governments unmoved — despite a half century of experience — by the failure of pot prohibition.
With some regularity, the Oregon State Police stop someone on Interstate 5 for speeding or some other violation and then find a bunch of pot in the car. Another report like that came out Thursday. An early-morning traffic stop on Interstate 5 near Wilsonville led to the arrest of a man from California for having about 9 pounds of marijuana, hashish and “other evidence.” This is routine now.

The Oregon legislature last year tried to cut into the illegal marijuana business at least a little by authorizing the state Health Authority to license legal dispensaries of medical marijuana. Dispensaries won’t end the activities of criminals, but at least they would give medical users a legal and easy way to get marijuana. No more trying to grow it themselves and be tempted to grow a little extra for outside income. No more dealing with suppliers for whom the lure of quick riches proves too great.

Albany, Jefferson and other towns are trying to thwart the legislature’s good intent by banning dispensaries. Now two legislators want to make it easy for local government to do just that. The Oregonian reports that two senators, Democrat Rod Monroe of Portland and Republican Bill Hansell of Athena in northeastern Oregon, are introducing a bill to grant cities and counties the right to ban dispensaries. Let’s hope the legislature avoids that particular mistake and rejects the bill. It should do the opposite: amend last year’s law to say that cities and counties are preempted from making their own rules in this field. (hh)