Dodging craters on our streets 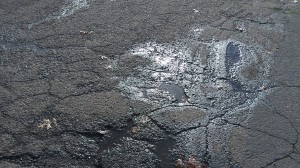 Take a ride on Fifth — I dare you.

The poor shape of some of Albany’s oldest streets is an old subject. A reader, Hazel Siebrecht, brought it up again on Feb. 28 in response to my story on the spending proposals before the CARA urban renewal advisory board when it meets at 5:15 p.m. today (March 4) at City Hall. 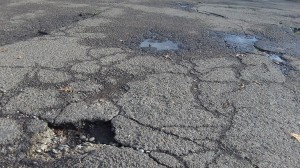 “This probably has nothing to do with CARA but, I’m still wanting to know who takes care of the streets in downtown Albany,” she wrote. “Third Street running past Albany Christian School is a disgrace. Do drivers ignore the streets on their way to spend money downtown? The street running past Ciddici’s Pizza is another teeth-rattling one.”

That would be Fifth Avenue. To appreciate the rattling, drive those streets in a pickup instead of a softly sprung sedan or, better yet, ride them on a bike. Better make it a sturdy mountain bike, which is what I rode there on Monday. On a road bike the street would probably feel like the famed cobbles on the roads to Roubais. (In northern France, in case you haven’t heard of that race.)

I looked up what the Albany city budget has to say about street maintenance. Turns out that the city expects to receive just under $2.4 million from the state gas tax this budget year. Together with some smaller revenue sources, that makes just over $3 million in the street fund for the year.

The budgeted spending shapes up like this: $1.8 million for street maintenance, not quite $1.1 million for “street administration” and the rest, just under $150,000, for storm water operations. It may strike you as noteworthy that $1.8 million in pavement repairs — $755,100 for personnel and $1.08 million for materials and services — should require $1,098,300 in “street administration, including $66,100 for personnel and $894,300 for materials and services. No doubt there’s an explanation, and I’ll report it when I learn what it is.

Many of the residential streets in the oldest parts of town have been patched, dug up and patched again so much that they probably have to be completely rebuilt in order to make them smooth. And for that, the city’s share of the state gas tax would not be enough, even if none of it went for “administration.” To pay for repairs, some cities have added a street fee to their monthly water and sewer bills. On the other hand, residents might be excused if they thought the term “urban renewal” was the very definition of repaving worn-out streets. (hh)