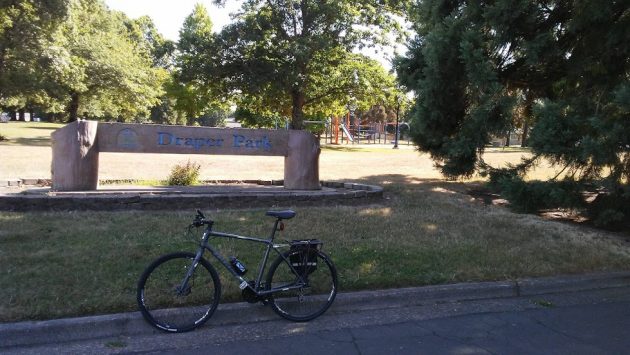 The sign tells you where I was on this Tuesday afternoon in August.

The thing about aimlessly tooling around town on a bike is that sometimes you discover a new place — new to you, that is. Which is what happened Tuesday when I turned a corner, saw some majestic old trees, went that way, and found myself in Draper Park.

In more than 40 years in Albany, I can’t remember ever having been in that park before. Too bad, too. Because it looks like a delightful place, with mature trees, both evergreen and deciduous, a nice playground, a few picnic tables, and a concrete pathway suitable for skateboarding or taking a walk.

The walkway surrounds a big expanse of grass. The lawn is more or less brown this time of year, but well maintained like the rest of the grounds. It’s waiting for a bunch of neighborhood kids to organize a ballgame of some kind.

This five-acre gem of a park is sandwiched between 29th and 32nd Avenues on the west side of Lafayette Elementary School. It’s in the middle of what the city calls the Oak Neighborhood, a part of South Albany with tree-lined streets and a mix of well-tended apartments, condominiums and single-family homes.

Draper is one of 33 parks in the city system, a system that is spread all over town along with Albany’s 10 trails and bike paths of various lengths. When you look at the map, you marvel how the city’s small parks crew can keep it all in the good shape that most of it is in.

Which brings up something else: The parks department is in the middle of updating its master plan, and believe it or not, you can help. On the Albany parks website there’s a little survey, and you can let them know what if anything you think should be done about parks and recreation. You can find the survey here.

As for me, I think the city parks are great the way they are. There are lots of them, well distributed across town, and especially the neighborhood parks, like Draper, don’t seem to be overrun. There’s plenty of space for kids to play, and for the rest of us, always room for a walk under the trees.  (hh) 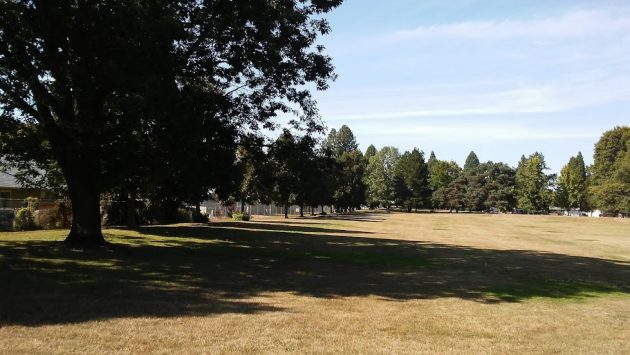 No crowds in the wide open spaces of Draper Park on this summer afternoon.

One response to “Discovering an Albany gem: Draper Park”