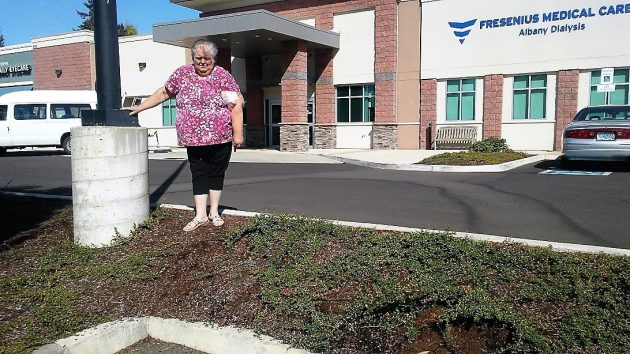 After her dialysis session Friday, Gayle Davis stands atop the two-foot berm that’s a difficult hurdle for her and other patients.

Looking at the hundreds of spaces at the North Albany Village shopping center, you’d think parking is never a problem. But then you’re likely not one of the patients at Albany Dialysis, the local branch of the nationwide Fresenius medical company.

The dialysis clinic was built on the east side of the shopping center in 2015. There are seven parking spaces in front, four of them marked for the disabled. When the seven are full, which I’m told is not uncommon at certain times, newly arriving patients can park in any of the other spaces farther away. Their problem: There’s a landscaped berm, about two feet high, between them and the clinic’s door.

Patients can climb up and down this berm, or they can walk around it. Neither option is easy for them. As Fresenius clinical manager Nicole McClure explained to me, some of her patients are elderly and many have medical problems, such as heart disease or COPD, in addition to their need for life-saving dialysis. And after five hours hooked up to the equipment, a period during which their internal organs are all working hard, these folks are wrung out and beat.

“We can slip and break a bone,” said Gayle Davis, the patient who contacted me. She thought a gently inclined ramp connecting the two levels would solve the problem. And she showed me where a ramp could be installed. It would take up just one space on the lower level.

But so far, pleas by the patients and the clinic itself have been in vain. The clinic leases its building and can’t build a ramp on its own. The property is owned by Cameron Management LLC, which lists its tax-billing address as a private residence in Bigfork, Mont. (The tax bill, by the way, last year was nearly $82,000. Benton County values the property at $7.2 million and assesses it for tax purposes at $4.3 million.)

One of the patients recently contacted Mayor Sharon Konopa. But she was unable to help. “If a walking path is needed,” she said, “then one of the property owners need(s) to make that happen.” (The mayor thought the parking issue covered two tax lots, each with a different owner. My look at the site and the map of tax lots told me the berm is on only one lot, the property owned by Cameron.)

Gayle Davis thinks that a story about this might help in getting the issue resolved. Let’s hope it does. I sent the property owner a question via social media. We’ll see if anything happens as a result. (hh) 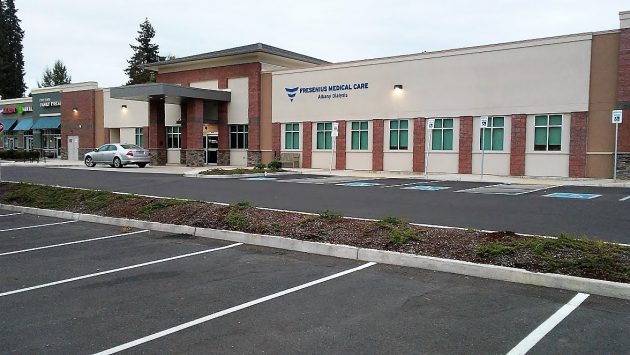 Just before 5 on Aug. 29, parking was not an issue at all, as it appears hardly anyone was around.