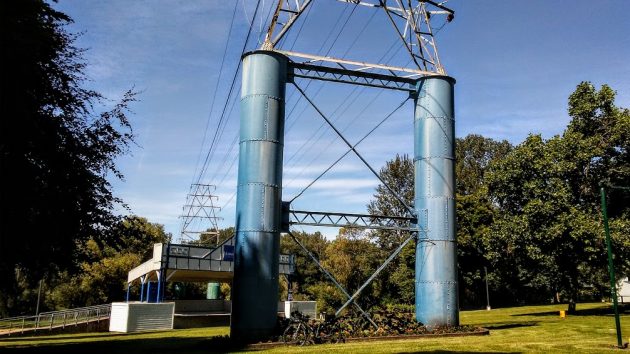 Monteith Riverpark, shown on June 18, might get a new stage. No one said anything about the powerline supports.

Building a new stage in Monteith Riverpark. Moving the senior center somewhere else in town and putting a market pavilion in its place. Making a boat landing down by the river.

These are some of the ideas being pursued as consultants narrow down the list of features in a proposed redevelopment of the Albany riverfront, including the Monteith park, the Dave Clark trail, and Water Avenue from Washington to Main.

The CARA Advisory Board got a rundown Wednesday from Chelsea McCann, principal in the Walker Macy consulting firm. She outlined ideas that got the most support during an online open house that generated some 500 visits and 144 comments.

Now, the consultants are beginning to prioritize what might actually be built with the funding available. They’ll come back with that list in a month or so.

CARA, the downtown Albany urban renewal district, has around $22 million of its authorization left to spend, and it expects to put most of that, between $15 and 18 million, into the riverfront revival. (The amounts were given by Seth Sherry, economic development manager.)

The CARA board generally applauded the elements outlined by McCann, and also offered various suggestions.

Councilman Rich Kellum cautioned the consultants to keep in mind, when planning new park features, that the city doesn’t have enough funding or personnel to take care of all the parks it already has.

As for moving the senior center to make room for an open-air, roofed market pavilion, there’s been no public discussion about how, when, where, or how much, or indeed whether to move it at all.

On the Clark trail, the plan so far includes rebuilding the west end, making all of it 10 feet wide, creating more spots from where to view the river, and maybe adding a pocket park.

Water Avenue would become a “plaza street” on its four-block west end. The rest would get sidewalks, trees, and marked parking spaces, among other things.

The recording of CARA’s virtual Wednesday meeting had not yet been posted on the city’s website by Thursday night. But if and when it becomes available there, you can review all the details yourself. (hh) 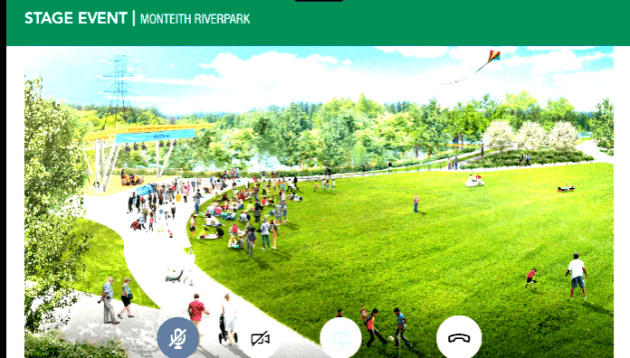 A screenshot of the consultants’ vision of Monteith Riverpark and its new stage.