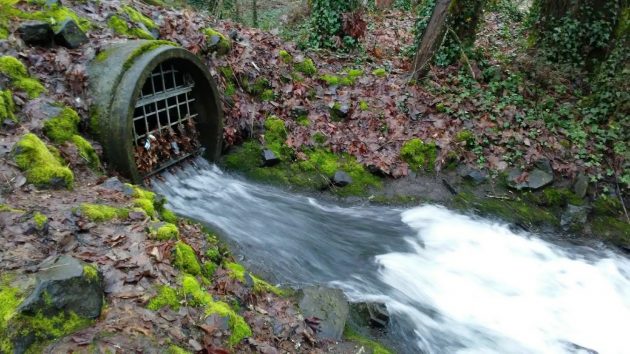 Water gushes from a storm sewer outfall on the Calapooia River at Albany’s Monteith Riverpark Wednesday.

Two years ago the city of Albany went to court to block new state regulations on the discharge of stormwater, saying that the rules went beyond what the federal Clean Water Act demands and would cost city ratepayers $5-7 million over five years. Now an agreement may be at hand.

Early on, the court suspended the new rules, known as a “municipal separate storm sewer systems Phase II permit,” MS4 for short, pending negotiations by Albany and other plaintiffs with the Oregon Department of Environmental Quality.

Now the DEQ has published a modified permit for public comment. The agency said the changes “considered input” from, among others, the six communities (including Albany) that had challenged the original in court.

The changes appear to take care of Albany’s objections.

“Staff have reviewed this draft modified permit and have noted that it clarifies problematic language that was in the November 2018 permit,” City Manager Peter Troedsson told me by email. “If the final permit that’s issued at the completion of the public review and comment period is not substantially changed, Albany intends to apply for coverage under this revised stormwater permit.”

The MS4 permit requires affected cities and counties to take steps to prevent pollution in storm runoff from reaching surface waters. Among other things, they must investigate discharges that cause the receiving streams to violate water quality standards. Then they must stop them. They must also hold public education campaigns to reduce stormwater pollution. And they must submit periodic reports to the DEQ.

You can find the revised permit and related documents on the DEQ website here. The deadline for public comment to the agency is Feb. 9, 2021. (hh)

The story, published Wednesday, has been edited to add the city manager’s comment, which I received Thursday morning.